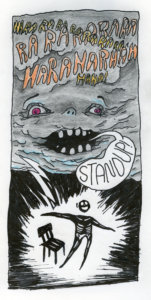 By the time I arrive at Thunder and Lightning (T&L), it’s already pretty full. The crowd is eclectic. The community around T&L has always been varied, and it seems like they’ve all turned out to laugh at some jokes.

I manage to snag a chair below the glowing red APPLAUSE sign. The rest of the room has a faint yellowish glow. The show starts late, but that just gives me more time to marvel at T&L’s décor. The yellow comes from a string of bulbs hanging above our heads. There’s a bar, of course, with stools, but there are no booths. The rest of the seating is either trendy kitchen tables or a series of couches facing each other; it’s more like a comfortable living area than a pub. There are also a surprising amount of taxidermied critters, including the blowfish dangling above the bar, eyeing the chatting patrons.

No one minds that it takes a while for the show to start. When it does, the chatter dies down and everyone’s attention is respectfully rapt. Six comedians. Two hours. Lots of laughs, giggles and guffaws.

Although this isn’t a brand-new event (this was the third of its kind held at T&L, the first being in February of this year), it is a fairly new idea: a night of very amateur stand-up comedy, with emphasis on the very amateur. None of the comics have done stand-up before they step on stage, so there’s naturally an uncertainty in the air. In some ways, this plays to the comic’s advantage, as Geordie Miller, the event’s host, explained. “There’s an incredible amount of generosity in an audience when they know that it’s the first time someone’s doing a difficult thing,” he said.

The atmosphere was so compassionate, in fact, that Meaghan Cunningham, one of the night’s comics, seemed to feel that she had to permit the audience to laugh at some of her more personal jokes. Later, she explained how she navigated the often rocky train of comedy. “I love jokes about my sexual identity and my physical gender expression in the right contexts, and I wanted to make it clear to the audience that I’m okay with them laughing at a joke I am making about myself,” she said. “I didn’t want them to think that they were hurting me by laughing.”

The audience’s hesitance to laugh at Cunningham’s personal jokes makes sense in the larger context of T&L. Miller is very familiar with the establishment and feels it’s a very sensitive space. This is somewhat contrary to the nature of comedy, which does attract its fair share of mean-spirited people. “Thunder and Lightning is a positive, safe space. And so the spirit behind it is good, but often that spirit and comedy, particularly amateur comedy, wrestle with one another.  It can be reactionary, hateful, nasty – the stuff people don’t need,” Miller explained. When it’s bad, live stand-up can be nightmarish. “I’ve seen a lot of really bad stand-up comedy,” he added. “You’re in the audience and you feel trapped. You’re trapped into this person’s world.”

Therefore, the crowd’s initial hesitance towards Cunningham’s touchy jokes makes sense. So – where do you draw the line for comedy? Cunningham said she thinks it has to do with the positionality of the comic. “If I was not a queer woman making jokes about queer women, that’s different,” Cunningham said. “I think it has to lead from your own experience and invite people to see the humour in everything, because that makes life a bit easier; sometimes you just have to laugh at how difficult things can be.”

In other words, as Miller put it, “There’s boundary-crossing and transgression, but you can do that in a way that’s not reproducing people’s oppression.” All throughout the night there was an aversion to punching down; one of the comics, Mark Macdonald, opened his set to rapturous applause as he declared he intended to make fun of rich people.

Despite being clearly comedic in nature, the event at T&L highlighted how unique the medium of stand-up comedy really is. “It’s such a clever way to be very open about something very serious, to invite people to laugh about it,” said Cunningham. At one point in her set, she discussed the recent straight pride incident in Chipman, and although that is clearly a very touchy subject, people were laughing. In that, I think, we see the strength of stand-up as a platform: It permits frank discussion of subjects which may otherwise seem taboo. Cunningham’s bit reminded me of John Mulaney’s “horse in a hospital” bit, in that it’s a clear, aggressive criticism that’s part of a larger discourse, but it’s not stressful or anxiety-inducing. It’s fun.

Fun, at the end of the day, really is what it’s all about. As Cunningham said, “I’m not doing a magnificent performance. I went up because I wanted to have fun and to make my friends laugh.” And that may be what I’ve failed to mention so far: This night was funny. Everyone did a killer job up there, busting the audience’s guts with dry observations, passages from childhood journals and personal anecdotes. In a few months’ time, there’s bound to be a fourth amateur show. Everyone should go, frankly. Above all, it’s a great time.