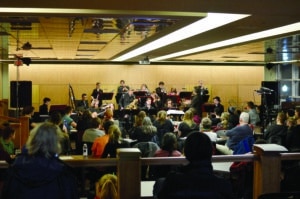 Last Wednesday, students and Sackville community members packed into Gracie’s in anticipation of the Mount Allison Jazz Ensemble’s final concert of the semester. A culmination of this past school year’s practices and performances, the concert, featuring an array of jazz styles, expertly showcased the genre’s inherent diversity.

While it may appear to those outside Mt. A’s music community that participation in the ensemble is restricted to music students alone, any student, faculty member or community member can audition for any of Mt. A’s ensembles and its chorale. Several of the students in the jazz ensemble come from non-music degrees.

Physics major Stephen Bennett is one such member. He has played with the jazz ensemble for several years.

“[Jazz is] this huge passion of mine. I think jazz is a lot more than just a regular genre,” Bennett said. “The chord progressions are so different, the chord changes are very layered and have a lot of colours, and rhythmically, it can be anywhere from really easy to follow to something incredibly daunting, something you can’t really tap your foot to.”

According to Bennett, one of the ensemble’s goals is to expose people to the many different faces of jazz in order to better represent the genre as a whole.

“Since a lot of people see jazz as this one thing, we try to take all these different varieties of jazz to show people how much more there is, and if they don’t like one kind they might like another,” Bennett said. “I think one thing we strive to do is collect everything: things from the big band era; things from the neo-big band era; the bop era from the 50s and 60s; [and] a lot of latin tunes, as well.”

Indeed, the multifaceted nature of jazz came out during the performance, which featured 13 songs. The old vocal tunes of mid-30s piece “Begin the Beguine” were performed next to the mid-80s mixed-genre piece “Slo-Funk.” Both songs showcased different ends of the 20th century. Despite jazz’s infrequent appearances on today’s top charts, it is undoubtedly still a living genre.

“Jazz is very much alive. Jazz actually is a little different from some art forms in that there’s a continuous tradition both of evolving new forms and styles and maintaining the old,” said Mt. A music professor James Kalyn, who has directed the 22-strong group since the ensemble’s auditions last fall. “[We performed] stuff that goes back to the 1910s and ‘20s … alongside things which were just written last year. Jazz continues to play all its traditional styles at one time, as well as creating new ones. It’s very much a living art.”

To Jack Smith, one of the ensemble’s saxophone players, participating in the ensemble provides him with a new means of expressing his instrument.

“Being a saxophone major, jazz ensemble is one of the few groups on campus where my instrument can truly shine. Plus, it’s a nice change of pace from the classical music that I spend most of my day playing,” Smith wrote in an email to the Argosy.

“The main responsibility of an ensemble member is to come to the two rehearsals each week and to practise our parts,” Smith wrote.

Auditions, which occur each fall, require participants to play one assigned piece, one improvisational piece and a set of scales. Kalyn emphasized interdisciplinarity as an important factor behind the success of all Mt. A’s ensembles.

“In many cases [the students] are music majors who aren’t [playing] their majors’ instruments, and there are [also] quite a few who aren’t music majors. We have a saxophone player who is a vocalist, and another who isn’t from the department at all. One of our trumpet players is a professor in classics, and another is from the community,” Kalyn said.

“We really want to get the word out that this is something open to all Mt. A community members. Part of our job is that we’re here to teach. So we encourage people and help them learn, and we want them to participate in making music,” Kalyn said.