Kevin Can F*** Himself Review 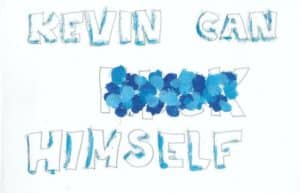 Imagine a typical household sitcom. Funny, bumbling, kind of useless main character Kevin, with his equally dimwitted best friend Neil, and gorgeous (but nagging!) wife Allison. Throw in a couple of other kooky characters—say, Kevin’s dad and his best friend’s sister Patty. You can picture it, can’t you? The antics they get up to, the brightly lit multi-cam shots accompanied by a laugh track. Now imagine that Kevin’s wife is planning to murder him. This is the premise of Kevin Can F*** Himself.

Whenever Kevin is off screen, the show shifts from sitcom to drama— dimly lit, using a single camera— to show how dismal Allison’s every day is. Additionally, the drama angle only makes the sitcom scenes more sinister. The bright lighting seems harsh and the laugh track feels foreboding and ominous. The way that the sitcom laughs at the expense of its female characters is also highlighted. As the show goes on, it seems like Allison and Patty are somewhat self-aware of the switches they have to make to fit into the sitcom, and therefore into Kevin’s presence, creating a very Rosencrantz and Guildenstern Are Dead vibe.

Overall, the acting is brilliant. I started watching this show 100% because I love Annie Murphy, and she did not disappoint. Her Allison is real, awkward, and likeable, and she really makes you root for her. Eric Petersen’s Kevin is terrifying. He gets on my nerves and is unbearably annoying, and yet he gives off the energy that he could also kill someone and get away with it. The real surprise star of the show, though, is Mary Hollis Inboden’s Patty. Patty is an incredibly complex character that starts out as one of Kevin’s sidekicks but slowly becomes the Louise to Allison’s Thelma. Patty becomes her own person, pursues a queer relationship, and learns what she wants in life. She’s protective and caring and trying her very best. Inboden makes Patty funny and heart-wrenching in the best way. All of the actors move beautifully through the two genres, slowly showcasing that the only one who thrives in the sitcom is Kevin.

Season one follows Allison, and later, Patty, as they plot to kill Kevin and make it look like an accident to set Allison free. However, when everything, as always, goes Kevin’s way, season two focuses on the pair instead finding a way to fake Allison’s death, which would set her free, but would also take her away from Patty. This is where I started to feel like I might not be getting the ending that I wanted.

Season one brings Allison and Patty from acquaintances to ride-or-die (kind of literally) friends, sitting in a bathtub and drinking wine, toasting to perhaps dying together. Season two continues to build on this relationship, with numerous references that Patty might be in love with Allison and both of them doing anything for each other. However, the ending feels vague. They’re still there for each other, but it doesn’t feel like anything has changed between them since the end of season one. There has been tons of relationship and character development, but we feel like we are back where we were a season ago, with only two minutes of the finale dedicated to Allison and Patty’s relationship. It feels like queerbait. At the very least, Patty is canonically queer, but the vague conclusion allows viewers to interpret the ending as Patty being in love with her straight best friend. There is so much subtext pointing to the two as a couple and to Allison being bi (including a bi flag puffer jacket that I definitely didn’t buy), but without an explicit statement, it feels like queerbait at worst and like I looked too deeply into parts of the show at best.

Even the Kevin ending feels like a loose thread. Throughout both seasons, there is this feeling that the audience doesn’t know what Kevin is capable of. When we finally see Kevin in the drama genre, he’s abusive, but we knew that already. Additionally, it doesn’t actually say anything. He’s verbally awful to Allison, but we’ve seen that in the sitcom lens. Why does Allison have bruises? Why does Allison always wear long sleeves? There are unanswered questions about just how terrible Kevin might be. His self-destructive end feels rushed and unsatisfying.

I really wanted to love this show. It had such an incredible concept, a stellar cast, and a beautiful relationship between Murphy’s Allison and Inboden’s Patty, but it fumbles the timing of the plot. The second season felt both rushed and too long, and there are numerous questions that were left unanswered. I left this show with confusion crowding my brain and an unfortunate sense of apathy.