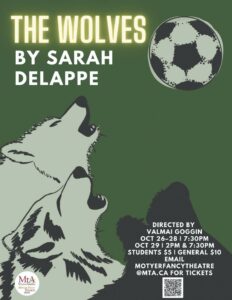 “There is nothing more terrifying than a teenage girl” – Chris Colfer

In November 2021, nine Mt. A students were cast in a Motyer-Fancy Theatre’s (MFT) production of Sarah DeLappe’s contemporary play The Wolves. Directed by Valmai Goggin, this one-act story of a high school girl’s soccer team is a vibrant and unapologetic exploration of youth in suburban America. Rehearsals were unfortunately delayed, then halted completely as the COVID-19 pandemic resurged in the winter semester. Now, after nearly a year of anticipation, The Wolves is ready to play on the MFT stage from October 26-29.

The story of The Wolves spans six weeks. Every Saturday, nine teenage girls from different backgrounds gather to warm up before their game on an indoor soccer field. The sport is everything to these girls. Years of practice have honed the players into a finely-tuned machine of synchronized stretches and exercises. This balance is thrown into chaos by arguments, new members, and all the trials of youth. They laugh, they fight, and they talk school, sex, and global politics. Nothing is off the table.

Valmai Goggin, lecturer in drama at Mt. A, shared her motivations for directing the play after seeing it performed in Calgary: “It was an incredible experience watching a show that has the real audacity to put nine young women on stage in a time when we tend not to write shows that big, and we certainly tend not to have shows for young women that big. […] I could sense the pride and the power that those actors felt onstage doing the show and I was interested by the immense challenges that a script like this offers.”

The cast is definitely up to the challenge. “We have had a breakneck rehearsal process!” says Maya Nӧelle, a third-year drama major. “We went from not doing anything with the show for over a year to starting rehearsals in September. […] I think everyone has handled it with incredible grace and determination.” Nӧelle plays the character ‘#2’ (the players are primarily known by their jersey numbers). #2 is “probably the nicest girl in the team,” yet struggles with a secret darkness.

For Sarah Tardif, who plays #00, balancing her personal and professional needs in a sustainable way have been crucial to her success in the play. The third-year double English and Drama major, like much of the cast, has no background in sports but relished the opportunity to get in shape for the show. On her character’s emotional needs, Tardif shared, “For me personally it’s been emotionally draining, because I have a scene that is pretty much raw emotion. […] You need to balance what’s going on personally with yourself and what is going on in the landscape of the play with your character.” Her pride as a performer in such a demanding play rings true for the whole cast.

Alora Simon plays the worldly yet socially awkward #46, and reflected on the differences between the tactless, occasionally cruel characters and their actresses. “I love these girls […] even if #46 is very socially awkward, it does not feel like that when it is just the cast. It’s good. And because we’re all so close knit – it doesn’t feel awkward when there has to be awkward scenes. It’s nice, you know? We all benefit from each other.”

The Wolves promises to be a show like no other. Students in every year of study make up this cast, but collectively they share an incredible spirit of camaraderie that is reflected on the stage. As Goggin says, “It’s about friendship, it’s about strength, and I think ultimately it’s about the really unique connections and the really unique relationships that come from specifically a group of young women. […] It is absolutely a universal story about youth.”

There will be five showings of The Wolves at the MFT, located in Mt. A’s Purdy Crawford Centre for the Arts. From October 26-29, the show will start at 7:30pm each evening, with an additional matinee at 2:00pm on Saturday, October 29. Tickets are 5$ for students and 10$ for adults, paid at the door, with the exception of Thursday the 27th, which is ‘Pay What you Can’ night. Email [email protected] now to reserve your tickets. Seating is limited each evening, so booking beforehand is definitely encouraged.