The history behind Halloween 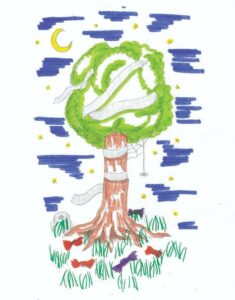 We are all familiar with the stories of goblins and ghouls, the monsters that lurk in the night, and the witches that fly overhead on their brooms. When thinking about these creatures, your mind may conjure an image or two. Perhaps “This is Halloween” from The Nightmare Before Christmas starts playing in your head. However, the version of Halloween you may know, the one characterized by trick-or-treating and costumes, is just the latest version from this holiday’s extensive history.

The holiday we now know as Halloween originated from an ancient Celtic festival known as Samhain. It was during this time that the Celts celebrated their new years by marking the end of summer and the beginning of winter on November 1. The Celts believed that the line between the living and the dead were blurred on the eve before (October 31), allowing spirits the opportunity to wander over to the mortal plane. In order to ward off these spirits and prevent them from causing harm, people would light bonfires and wear costumes.

Samhain was one of the quarterly fire festivals held by the Celtic people. This festival took place at the midpoint between the fall equinox and the winter solstice. Families would let their hearths burn out when the harvest was being collected, then, when the work was completed, the Druids lit fires in celebration. They used a wheel, which represented the sun, to ignite the fire, prayers were spoken, and predictions were made for the upcoming winter. Individuals would dress in animal heads and skins as part of the celebration, before taking a flame of the sacred fire back to their own hearth. It was believed that in re-lighting your hearth with this blessed fire, one would be protected from the cold winter months.

Samhain went through many changes though, especially in the Middle Ages. During this time, Christianity was not keen on the popularity of a Pagan Holiday, especially considering they had recently taken hold of Celtic communities and Samhain was arguably blasphemous. In an attempt to forcefully rebrand the festival into a Christianity-approved light, Pope Boniface in the fifth century moved Samhain to May 13, away from fire festivals, and towards being celebrated as a Saints’ and Martyrs’ day. His attempt was unsuccessful as people continued to celebrate in the fall. In the ninth century, Pope Gregory moved the celebration back to late October, early November, but not without maintaining the Christian image. Pope Gregory decreed that All Saints’ Day (All-hallowmas) would be November 1, and All Souls’ Day would be the day after. All Souls’ Day had similar celebratory proceedings to that of Samhain and was generally believed to be the church’s attempt at a replacement. To some extent, the church was successful in infiltrating Samhain. The traditional night of Samhain fell on the evening before All Saints’ Day and became  All-Hallows Eve (Halloween).

Wearing costumes is not the only tradition from Irish and Celtic culture that has stuck around. Jack O’Lanterns emerged from an old Irish myth about a man named “Stingy Jack.” In the beginning, Jack gets a drink with the devil but refuses to pay. He convinces the Devil to turn into a coin to pay for the drinks, then Jack keeps the devil (in coin form) in his pocket next to a silver cross. The devil cannot turn back. Jack makes a deal promising that the devil cannot bother him for one year, and he cannot claim his soul when Jack dies. Jack later tricks the devil into climbing a tree for an apple, scratching a cross in it so the devil cannot come down until he promises not to bother Jack for 10 years. Jack eventually dies and neither God nor the devil want to deal with him. The devil sends Jack into the night with only a burning coal. Jack hollows out a turnip to put the coal in to light his way as he wanders, thereby dubbing him Jack O’Lantern. People began carving scary faces into turnips near windows and doors to frighten away Stingy Jack and other evil spirits. Irish immigrants brought this tradition to America and began using pumpkins. However, different produce is used worldwide to make these carvings.

Trick-or-treating also has connections to Samhain and the Irish and Celtic people. While people would wear animal pelts to ward off evil spirits, tables of food and offerings were left out in order to satisfy the spirits. This eventually emerged into the tradition of people dressing as malevolent creatures and performing trickery in exchange for food and drink. This was known as mumming. By the time that Christianity blended with Samhain, the tradition switched to poorer people receiving pastries called soul cakes from the wealthy in exchange for the promise of prayer to the dead relatives of the homeowner. This became known as souling. Children eventually were the ones to ask for gifts. Children in Ireland in particular would perform a “trick” (skill, poem, song, etc.) in exchange for their treat.

Halloween has a rich cultural history that has created one of the coolest holidays ever. All of the information in the above article was sourced from the History network. Please head to their website, History.com, in order to read more about Samhain and Halloween’s origins.