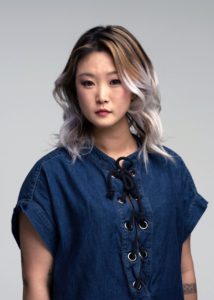 I’ve always been deeply drawn to costumes. When I was 15, I tried to recreate William Ivey Long’s Cinderella transformation dress using some old clothes and some sheets for a Halloween costume. The next year, I dragged my mother and brother on the subway in New York far outside of the tourist centre to visit the TDF Costume Collection. I gasped at the pure magic of an entire warehouse filled to the brim with costumes from plays, musicals, and operas.

Last year, as a graduation present to myself, I bought some costume pieces from the Broadway run of Natasha, Pierre & The Great Comet of 1812, just to make sure they would be loved and taken care of. So, when the Motyer-Fancy Theatre announced there would be a new Resident Designer this year, I was absolutely ecstatic.

I had the chance to interview Resident Designer Julia Kim earlier this week, and we seemed to have similar origin stories in the arts. Kim said she “think[s she] was always drawn to theatre sets, and costumes, but…coming from [an] immigrant Asian family, theatre wasn’t the thing that was recommended.” She remembers telling her mom she wanted to do theatre at a young age, but was met with resistance and a “typical” response: “she put me in violin lessons and piano lessons.”

This pushback meant that Kim actually went into kinesiology for her first year at Simon Fraser University, before she realized that she “just didn’t like it at all,” and “couldn’t see [herself] in the field.” Kim took a year off before transferring to the theatre program, noting that, in her first year, “as soon as [she] walked into the theatre [she] knew, ‘oh, this is where I belong. I need to do this.’”

Kim then found that Simon Fraser University’s theatre program was focused on experimental or devised theatre. It did not  allow for as much opportunity in set or costume design, so she transferred to Ryerson University, where she graduated with a BFA (Hons.) in Performance Production in 2015. By making this switch, Kim thought it would be for the best because “Toronto is so much bigger than Vancouver, and their theatre scene is a lot bigger.” In Toronto, Kim watched as much theatre as possible, seeing touring Broadway shows, indie or mid-sized theatrical productions, such as from Soulpepper or Tarragon productions, and shows that her friends were involved in. Kim also worked as assistant designer at Stratford Festival and Shaw Festival where she “got to look more closely at working on bigger budget shows and more repertoire-style theatre.”

Mt. A was appealing to Kim because “it’s rare to see a Resident Designer position where you get to stay in one spot and design multiple shows” as well as having a connection to the educational aspect. She has done theatre workshops at Rosedale Arts High School and mentioned how she enjoyed interacting with students and feeling their passion in questions like: “How do you actually work in theatre?” and “What do you do in theatre?” Kim is excited to continue education in theatre here at Mt. A by “interacting with students, mentoring them, [and] working together on productions.”

In terms of inspiration, Kim draws from a variety of sources. For example, she spoke about seeing a Cirque du Soleil  performance where a platform would transform the stage into a pool that performers dove into. The set pieces also moved in and out of the pool. Kim also spoke about visiting the Prague Quadrennial of Performance Design and Space, which she described as an exhibition that challenged her understanding of theatre. “European contemporary theatre is very different, most of them didn’t have any text, and made me think, is this really theatre? What is the narrative here? What is the story?” Kim said. She was similarly challenged by digital theatre last year, and asked again, “is this really theatre?” because of the blurring of lines between film and theatre.

Kim will design several shows at the Motyer-Fancy Theatre this year, starting with A Gentleman’s Guide To Love and Murder, which runs October 27–October 30. She spoke about the challenge of doing a Broadway show with many costume and set changes, and will be swapping the traditional flown-in sets for projections. Come see the final product in just a few short weeks!