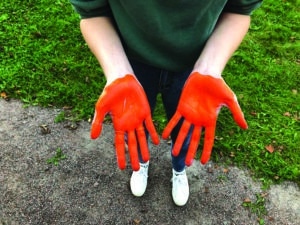 Elder William Nevin is the Elsipogtog First Nation’s Sundance Chief and ceremonial Elder; he is a cultural transmitter, a knowledge keeper, and a mentor to many. As a member of the Sipekne’katik First Nation, Nevin’s efforts to raise awareness about the pain he and so many other Mi’kmaw people have experienced growing up in Canada has been a long one.

Nevin was only seven years old when he was forced to sneak into the bushes with his father searching for food. This was a terrifying experience because they could face jail if the police caught them, but they had no choice. They had to provide for Nevin’s twelve siblings. Most of the time, Nevin would go without food so that his siblings could eat. At times, they would go days without eating, so eating even one meal was a good day for them.

Children from Mi’kmaw, Métis, and Inuit families and communities were taken from their homes and placed in schools, frequently against their will. The Mi’kmaw people were discriminated against in these schools with the government’s restrictions prohibiting them to advance past the eighth grade. They had their legs drilled so severely that they couldn’t work. Seniors and staff continually bullied them, and when it was time to go home, their heads were smacked. In the past, monkeys were provided for scientific experiments. The school Nevin attended used the Mi’kmaw people as test subjects. They would line up Mi’kmaw people every week and scratch their backs to see if they responded. If they responded, they would administer a vaccination.

Residential schools were but one tool in a larger plan for the assimilation of Indigenous peoples in Canada. Residential schools had an impact on general and self-reported health and an increased rates of chronic and infectious disease. Mental discomfort, sadness, addictive behaviors, drug misuse, stress, and suicidal behavior are all effects of residential schooling proving detrimental to mental and emotional well-being.

In their homelands, the Mi’kmaw people were treated as slaves. The government placed Indigenous people on four big reserves, and they intended to steal their lands and murder the Mi’kmaw people. They had many rules that they could not break; for example, they couldn’t have more than 50 cents in their pockets and they were not allowed to talk to non-Indigenous people. If they broke these rules, the government would retaliate harshly.

The government tried to change the Mi’kmaw people’s beliefs, their culture, and their practices. They forced them to pray and if they did not, they were beaten. They whipped the Indigenous peoples because they spoke different languages. Even when they were in need in times like these, Nevin and his siblings had nowhere to turn or to seek help from. Nevin encourages us to unite, not as individuals of various ethnicities, but as people of the same heart; to unite as one, and to build a magnificent home called Canada that can accommodate everyone.