Mt. A falls to demons and dark magic 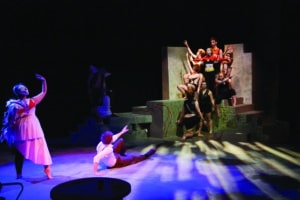 Last week magicians, angels and devils were seen gliding, crawling and scrambling across the Motyer-Fancy Theatre’s stage in a production of Dr. Faustus. Christopher Marlowe’s 16th-century play tells the story of a German scholar who, dissatisfied with the conventional forms of knowledge available to him, decides to dabble in magic and the sinister arts. This ultimately leads him to sell his soul to the devil and consent to go to hell in exchange for power and protection during his lifetime.

Dr. Faustus was made up of both an ensemble and a main core of four actors: Sabrina Stace, Iris Smith-d’Agincourt, Matthew Cross and Mark Nicol.

Written in 1588, Dr. Faustus is an Elizabethan tragedy that focuses on themes of good and evil by representing heaven and hell as real places. Given the period in which it was written, its language is similar to what is found in Shakespeare’s plays.

“It was hard for me at first [to learn the old language],” third-year drama student Stace said. “It was hard to get your head and tongue wrapped around it all … but once you did, it [was] not that hard to memorize.” She compared it to learning song lyrics due to the lyrical rhythm of Early Modern English.

Stace played three roles in this production: Wagner (Faustus’s servant and companion), the good angel and the bad angel.

Enacted in a simple setting with no intermission, the play’s staging was a nod to the way it would have been performed originally. However, this version differed from original productions in significant ways, particularly in its overt portrayal of sex and sexuality. The evil spirits and demons were costumed provocatively, embodying themes of temptation and lust in their physical movements and interactions with one another on the periphery of the stage’s main action, creating an atmosphere of  sultry impurity.

Dramatic lighting and smoke machines produced a sense of claustrophobia as Faustus gradually drew closer and closer to his ultimate demise and descent into hell.

English professor Karen Bamford teaches both Shakespeare and Marlowe at Mt. A. “Marlowe is a great playwright but is underperformed because he happens to be overshadowed by Shakespeare,” she said. She believes that despite its relative obscurity,  Dr. Faustus is an enjoyable play to experience. “It is easy to understand [and] the language is beautiful,” she said.

Marlowe’s literary craftsmanship can be seen when Faustus (played by Cross) falls for the temptations of sinister magic and cries out, “What will be, shall be! Divinity, adieu! These metaphysics of magicians, and necromantic books are heavenly!”

Dr. Faustus was written at a time when audience members would have understood heaven and hell as literal realities. As such, the play concerns itself with issues of self-gratification, such as Marlowe’s longing for material wealth and sex, themes prevalent and poignant both now and during Marlowe’s lifetime.

Bamford believes it is important for these older plays to be performed for and by undergraduate students. “We only experience the present moment and contemporary culture over and over again. Because of this we are temporally challenged. We rarely step outside of the mental world that we live in,” Bamford said.  “If you have a chance to watch a play from the 16th century, you are forced to expand your understanding of humanity and the human condition.”

Bamford added that Marlowe wrote this play as a “fascinating study in self delusion,” seen when Faustus convinces himself that it is better to collaborate with the devil in life than it is to go to heaven after death. “[Watching this makes] you see the world a different way,” Bamford said.

Stace agreed with Bamford, adding that there is “[An] importance to being taken into another world … and [being encouraged to grapple with] what temptation and power can do.”

Stace also discussed her approach to acting in the show. This play is an important component of the work going toward her independent study, which is required for her drama major.

“In this study, [I wanted to] put a focus on actor wellness,” Stace said, referring to both the physical and mental aspects of acting and how they impact an actor’s self-efficacy and abilities. Part of the work for her independent study involved detailed journalling about her acting experiences.

An important part of rehearsals included the art of blocking and moving. “Blocking is creating stage pictures [and] running a scene to see where things go and to polish them, [while] movement rehearsals are all impulsive and improvised movement,” Stace said. Emphasis on contact and group movement encouraged the cast to come together and unite their ideas and actions.

Well received by horrified and amused audience members, Dr. Faustus dramatically depicted the ensemble of gasping and contorting demons as they surrounded the four core actors. Imbuing guilt and pleasure in Faustus’s interactions with the devil and his henchmen, the performance caused audience members to feel the strangely satisfying emotion of being simultaneously entertained and slightly disturbed.

The play closed with Faustus dying and going to hell. As the lights went down, the ensemble of demons moved among audience members, creating the sensation that all those present had fallen to hell along with him.

“I enjoyed the play,” third-year PPE student Hamza Munawar said. “It was better than I thought undergraduate students would be able to accomplish. I was impressed at how convincing and physical the acting was.”

Third-year drama student Erik Garf was also impressed with the production. “I was completely immersed in this production of Dr. Faustus and was awestruck to see the incorporation of flashy costumes and stylized movement in what seemed to be an attempt to adapt Marlowe’s Elizabethan tragedy for a contemporary audience.”