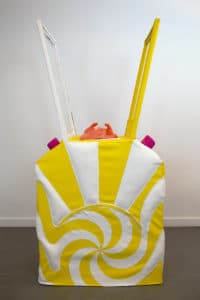 Alana Morouney, who graduated from the Fine Arts program at Mt. A in May, was selected as New Brunswick’s regional winner of the 19th annual BMO 1st ART! Competition. Her stunning winning piece, titled I’ll get you next time/I keep letting you win so that I can hold your hand, is an interactive multimedia sculpture inspired by Morouney’s child and the pandemic.

The BMO 1st ART! Competition invites deans and instructors of studio art from over 100 post-secondary institutions across Canada to select three students among graduating classes to have their work submitted. The 13 winners are then selected by a committee of curators and artists.

Morouney mostly works with textiles and interactive sculptures, both of which she integrated into her winning piece. She has always been interested in textiles, saying she “always made [her] own clothes as a teenager, and thought [she] was going into fashion design.” She entered an unpaid internship as a seamstress, but it didn’t work out. That led Morouney in several different directions including jewelry and film photography.

By the time she came to Mt. A, she had already dropped out of school twice, studying fine arts, and actually started pursuing science, hoping to go into nursing afterwards. However, Morouney said that “while [she] was taking all of the science prerequisites, [she] ended up taking fine arts classes that were just so awesome, and it was really hard not to take the next courses.” She struck a balance, while taking some psychology to open up the possibility of a career in art therapy before settling into being a studio artist. Morouney noted professors Leah Garnett and Adriana Kuiper as especially inspirational.

Morouney’s large yellow and white sculpture looks like a fairground game, or something out of a Roald Dahl or Dr. Seuss book. There are buttons on either side, operating two textile hands engrossed in a thumb war. Morouney’s sculpture was inspired by the troubles she had with bringing her 8-year-old child to the grocery store during the pandemic; she thumb wrestled with him to keep him from touching everything. She would let her child continually win, so that he would keep holding on to her, and this moment is beautifully brought to life in Morouney’s sculpture. “Being in school, I felt like I was missing a lot of his childhood, and I don’t want to get older and lose that playfulness myself,” Morouney said.

When specifically talking about the interactive component, Morouney said “trying to figure out how things will move is the really fun part, the magic trick,” as she created the sculpture from home. She had previously made interactive sculptures and she “didn’t want to make something that just hung on the wall and people looked at.” Morouney especially played with the idea of wanting to touch something but having to restrain yourself. Although when the piece was displayed at the Owens Art Gallery last year, for safety it was decided that no one would touch the sculpture, and instead a demonstration video was played behind it.

Playfulness and parenting are truly visible as a key tenet of Morouney’s identity as an artist and that she will continue in her future works. She has a few projects on the go and is currently creating a website. She is “just trying to figure out ways [she] can be a working artist in ways that compliment the kind of life [she wants] to live.” More interactive pieces that involve children are definitely in her future. She wants to involve both her own kids and others in order to foster a connection between being a present parent and a working artist. Morouney’s sculpture and accompanying video will be displayed in the BMO 1st ART! Exhibition November 16 – December 8 virtually at artmuseum.utoronto.ca.