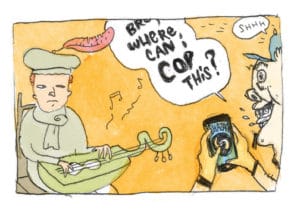 Fall has returned to Sackville, and with it the annual Sackville Festival of Early Music. On Friday, Sept. 22, I had the absolute pleasure of seeing ¡Sacabuche! perform the inaugural concert for this year’s festival, which is now in its 13th year. The ensemble, under the artistic direction of Dr. Linda Pearse, presented a blend of traditional German, Czech, Austrian and Swedish music from the 16th and 17th centuries.

Shawn Bostick, the festival’s administrative director, welcomed a filled auditorium Friday night in Brunton. Attendees, students and members of the community alike, arrived excited to witness what promised to be an interesting night of lesser-known music, entitled “Hidden Treasures.” Most of the compositions from this concert had been found in ancient European archives dating back to the Medieval Period.

For the most part, the band used conventional, popular instruments, such as the violin, organ and an assortment of brass. The truly stunning instruments, however, were those that most people do not see on a regular basis, such as the theorbo, played by Daniel Zuluaga. This instrument looks similar to a sitar, although the harmonic strings are placed on an upper bridge instead of under the main frets.

Zuluaga masterfully breathed life into the 400-year-old compositions, and also had the concert’s only solo performance, a selection on baroque guitar. It was easily one of the highlights of the festival. He plucked and strummed in the traditional O-shaped pattern, creating a light tinkling sound that emanated from the guitar.

A few of the songs included in this selection were accompanied by vocals provided by contralto Vicki St. Pierre, who sang in the traditional style of early music lyricism; vowels rolled smoothly off her tongue, a feat requiring expert pitch control as well as an incredibly strong voice. St. Pierre navigated this challenge tremendously, and ultimately enhanced the concert with her powerful vocals and skillful handling of source material.

Communication among the musicians was an unbelievably well done aspect of the concert. All t’s were crossed and i’s dotted in this tight set. The first violinist in particular, Martha Perry, made her intention clear when beginning and ending sections by connecting with each of her fellow musicians using facial cues. She communicated without words or gestures – it seemed as if she led the band in its entirety.

A few of Mt. A’s own music faculty were present in the group of performers. St. Pierre did the school proud with her performance. Pearse, who played in the brass section, dazzled the crowd with perfect piping that easily filled the Brunton Auditorium.

Concerts and festivals like this are incredibly important for schools. Bringing different styles of music and different cultures to our fingertips allows us to find different perspectives. “It’s not something that happens very often,” said Brianna Green, a first-year music student. “It’s not as appreciated as much as it should be.” The Early Music Festival brings in an array of performances that are both inspiring and valuable to its community. I give thanks to all who performed for the privilege of experiencing such a magnificent performance.