Mt. A music on the road 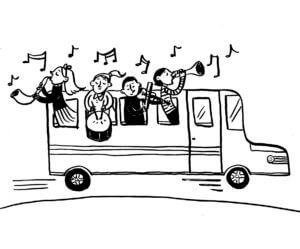 Music students take their talents outside of Sackville

Music students at Mt. A have numerous performance opportunities to showcase the many hours they have spent in rehearsals and practice rooms refining their craft. Students have the chance to do this in both ensemble and solo performance settings, while also attending guest or faculty performances to witness professional, high-calibre performances for them to aspire to.

Amid the busy schedules of practising, going to classes and watching concerts, many students perform outside of Sackville throughout the school year. Various ensembles or performance opportunities out of town give students musical experiences different from ones available within the department of music at Mt. A.

“Singing in the Nova Scotia Youth Choir has helped me become more prepared for university-level ensembles,” said Lynch. “Although only two students in the choir were [from] out of province this year, both representing Mt. A, everyone at NSYC is aware of Mt. A and the music program is held in high regard.”

Some programs such as NSYC require a fee for musicians to participate, whereas other programs offer in-the-field experience while getting paid. Students often use this opportunity to gain experience performing on an instrument other than what they study for their degree.

Owen Switzer, a third-year saxophone student, has performed with several bands outside of Mt. A since beginning his studies.

“It has been a great experience working with the army, having lots of playing opportunities on my secondary instrument [clarinet],” said Switzer. “I have regular employment with the Third Field Royal Canadian Artillery Band during the school year, as well as with the Band of the Ceremonial Guard during the summer.”

Music students travel across the Maritimes regularly, with several students having performed in concerts earlier this month. Second-year flautist Kristopher Williams is in his first season with the New Brunswick Youth Orchestra (NBYO), which continues to have a strong connection with the music department at Mt. A.

Music students often have to juggle ensemble commitments within Mt. A with out of town performing opportunities, although recently NBYO and the department of music at Mt. A have opened up more flexibility for students who wish to be a part of NBYO. New this school year, students performing with NBYO can now count their participation with the organization towards one of their ensemble credits.

“Earlier this month we had our season opening concert in Grand Falls, N.B., and it was rewarding to see our hard work paying off,” said Williams. “We travel to various locations in New Brunswick for rehearsals and concerts, and being an international student I look forward to seeing more of this country.”

Performance opportunities outside of Sackville are not limited to year-round ensemble commitments, as from time to time one-day or weekend-long events arise. Earlier in October, six singers including myself represented Mt. A in this year’s N.B. Choral Fest, a weekend event hosted by the New Brunswick Choral Federation every year that is open to choral singers from the Maritimes to learn and perform a major work under the direction of an esteemed conductor. Conductor Douglas Dunsmore directed the performance of Mozart’s Requiem in St. John, N.B.

One of the singers that attended was Jarred Beckerton (’19), a recent graduate and French horn player, who enjoyed his time singing at N.B. Choral Fest for the first time.

“Considering that during my time at Mt. A I did not study voice, other than singing in choirs, I found singing at N.B. Choral Fest a great way to meet other singers in the province and use it as a source of networking,” said Beckerton. “As a recent graduate of Mt. A, I found it very empowering to go to this event and help continue to put Mt. A on the map and get to meet many other Mt. A alum.”

I myself have not performed a whole lot outside of Sackville during my time at Mt. A, given my commitment to serving the musical community within Sackville in various forms, but have taken on more “Mt. A on the road” experiences over the last few years of my degree. I highly encourage other music students to be adventurous and explore the musical scene outside of Sackville as much as possible.