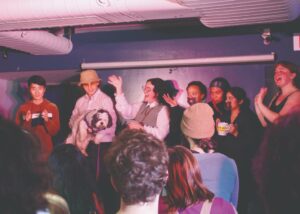 Last Wednesday, the Pond was full to the brim with Mt. A students chattering and waiting eagerly for a show to begin. There were so many people there, in fact, that the performers were scrambling to put extra chairs out to accommodate the crowd. What was the show they were so excited to attend? A special Halloween performance by Mt. A Presents!

At the door, attendees were asked to donate what they could, with the bonus that, if you did donate, you could suggest a song to be used in the first segment of the show, an improvised musical. Instead of funding the club as they normally would, the donations were going to support one of the club members’ service dog, Puzzle, who needs surgery because of some health problems.

The show began with the group asking for a fear to incorporate into their musical, in line with the Halloween theme. Following a chorus of shouts they decided that their music would be about a crippling fear of toes. This lead to raucous laughter as they performed a musical that started with a therapy appointment, contained a crushing divorce/murder, and ended with the apprehension of a body-part stealing supervillain. I was in stitches watching them attempt to fit lyrics about the wacky scenario into karaoke songs suggested by the audience. 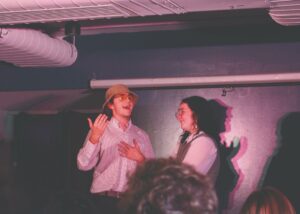 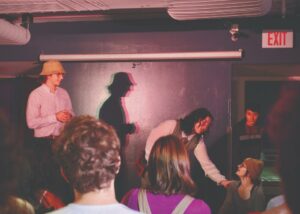 After a short break, where the drink special was decided by an audience member who correctly answered a trivia question, the second segment began. This part of the show was a murder mystery set in my suggestion of an abandoned amusement park. It involved several deaths, a janitor turned detective, and the question of who exactly is liable for deaths on the rides of an abandoned amusement park.

According to Brady Hagget, a first-year computer science major and member of the cast, the two groups practiced separately to decide on their formats and plans. “In the nature of improv, nothing is scripted, but the general flow of what we’re going to be doing is actually decided beforehand,” he said, “we’re going to play this game, or we’re going to try this tactic and it’s going to go vaguely in this direction, but who knows what’s actually going to happen.” He explained that, for the murder mystery, the victims and detectives were decided, but the villain, who turned out to be Brady himself playing the creepy owner of the park, was left up to the decision the detective made in the moment.

Hagget noted that “[he] was very proud of what [he] was able to do, as the person who was eventually found guilty, but [he] was very happy with how everyone else played off of [him] during that.” He thought that “it went very well and the audience seemed to enjoy it.” Later he added that “[they] performed probably better than [they] have before, so [he] would say it went very well.”

As a first-year, this was the most people he had ever seen at the improv team’s shows and he considered the reactions of the audience to be important. “My favourite part of the show might have been after the show,” he said, “because I got to hear what everyone thought of the performance. It was very sweet to hear who had nice things to say about what.” He also noted that his favourite part of the actual performance was his talented fellow actors.

Finally, Brady wanted to remind Mt. A’s students that on November 16, there will be a Puzztacular audience participation show to raise additional funds for service dog Puzzle. Cast members have $10 tickets to sell for a show where, according to Hagget, “we are doing everything we can to make sure that as many audience members who turn up get onstage and get involved with the games.”