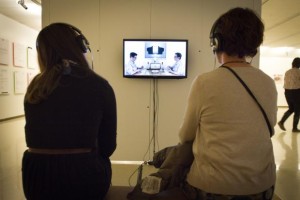 As March rolls to a close, it’s fair to say that all students, even the most diligent, have come up short in some way. Maybe it’s a midterm we could have studied harder for, or a paper that could have used a few extra hours of research. To try is to accept the possibility of failure. The real question is how we react to this failure, which is what curator Lisa Theriault seeks to answer in her ongoing exhibition at the Owens, “Hang In There.”

The exhibition attempts to tease out the potential humour in trying our hardest but not quite making it.

“I originally wanted to explore humour in art because I think that it makes art more accessible,” explained Theriault. “Artists can take something familiar, make it funny, and get [viewers] to think about it in a new way.”

With this general goal in mind, Theriault stumbled upon Jon Sasaki’s video installation Hang In There, which depicts a kitten dangling from a tree branch and fighting, but never quite succeeding, to pull itself up. The video became the cornerstone of the exhibition, and the idea of comedic struggle became the show’s unifying theme.

“The piece really resonated with me because it’s all about that struggle to achieve something, and I think that’s really a big part of what students go through at university,” said Theriault.

Kelly Mark is another Canadian artist with two pieces included in the exhibition: a video installation entitled 108 Leyton Avenue and an audio recording entitled I Really Should. Both pieces revel in a darker, less obvious form of humour than the Sasaki piece, focusing less on collective failure and more on the artist’s personal battle to forge a unique identity.

108 Leyton Avenue features the artist literally confronting herself. The video shows Mark sitting on both sides of a card table playing solitaire, drinking whisky, and reflecting on life with contradictory platitudes, ranging from ‘It’s all for the best’ to ‘The worst is yet to come.’

“You really feel that [Mark] is at odds with herself in that video,” said Theriault. “Her work is funny, but it can also be kind of uncomfortable, and I think that can be a really interesting mix.”

I Really Should is a 40-minute recording of Mark listing 1,000 things she “really should” do, including both “become an environmentalist” and “buy a big truck to roll around town.” The piece reinforces the idea presented in 108 Leyton Avenue that it is impossible to achieve all of the things society says we ought to, but that at least we can and laugh at this inherent impossibility.

Rounding out the exhibition is a video installation by Bridget Moser, entitled I Want to Believe. The installation is composed of two separate videos in which Moser plays with a folding table, a picture frame with a stock photo of a nuclear family, a beige sheet, and a rotary telephone. Both videos have different sound tracks and can be viewed independently. However, by presenting both videos together it allows the viewer to appreciate the new meaning created by watching the video feeds from both screens at the same time.

“The two videos allow the viewer to have a different experience every time they look at the piece,” said Theriault.

Moser will be unveiling a new performance piece, Thing of Beauty, at the Owens on Friday, March 20 at 7:30 p.m. While the details of the piece have not been made public, Moser has assured Theriault that because March 20 is both a solar eclipse and the spring equinox, “strange forces will be at work.”

“Hang In There” will be on display at the Owens until April 8.