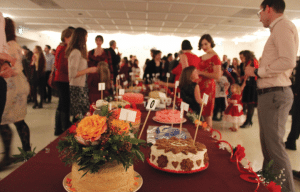 Delectable treats, dessert-themed outfits and friendly competition created a playful vibe at the Sweetest Little Thing, an annual fundraiser at the Owens Art Gallery which took place on Sunday night. From the art auction to the homemade sweets and the photo booth, the Valentine’s Daythemed fundraiser had something for everyone.

The main portion of the evening was the art auction, featuring works donated by Mount Allison students and staff as well as “supporters from across the country and beyond,” according to the Sweetest Little Thing website. A silent auction format allowed guests to bid at their own pace throughout the evening.

With minutes to spare before the closing of each section, crowds gathered to watch the last-minute bidding war. Participants continued to outbid one another until the last second, while spectators anxiously awaited the results.

The competitive stakes were especially high in the final bidding of the evening. All focus was on one piece in particular: Eric Walker’s The Shattered House, American Linoleum Version. Two guests outbid each other back and forth for several minutes, until one of them finally admitted defeat with a friendly handshake.

Walker’s piece sold for $700, and was the highest-bidding piece of the night. Mark Igloliorte’s Study for Sky also garnered attention, selling for $520.

Always a popular event, the cake walk also grabbed the guests’ attention. In a game similar to musical chairs, guests walked along a path marked by a series of numbers. When the music stopped, a number was called, and whoever was standing on the corresponding number won a cake of their choice.

Delicious homemade cakes were donated by members of the Sackville community, including Blooms and Cranewood on Main. A trio of judges also offered prizes to three bakers of their choosing. One of the winners, a heart-shaped cake pierced with 17 arrows, cleverly celebrated this year as the fundraiser’s 17th anniversary. Community members also donated smaller treats, like cookies and cupcakes, to be sold in the main lobby.

The Sweetest Little Thing was a successful event enjoyed by all, whether they won a painting or a cake, or just enjoyed the friendly atmosphere.