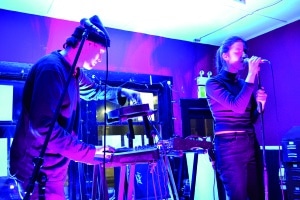 Saturday shows range from electronica and dreampop to heavy metal:

A mid-afternoon show kicked off the musical portion of the day’s events, with the Moncton two-piece Riet Soda taking to the stage first. Riet Soda played a set of garage punk focused on frontman Ross Duncan’s songwriting ability. The drumming was mechanical but lively, creating an energy that was not fully capitalized on by Duncan. The guitarist played sloppy chords and displayed a strong sense for writing poppy punk melodies, though his guitar sound was not full enough and lacked the punch required to carry a two-piece band.

Motherhood was up next, a Fredericton-based three-piece punk-blues band that played a set of howling jams. Their songs mutated through various time signatures and styles, hopping from heavy electric blues in the vein of Black Sabbath’s debut album to jazzy breakdowns, only to snap back together into solodrenched noise. The band’s vocalist howled southern-gothic narratives of loss and redemption as he squelched out solos that made a mess of the pentatonic scale. The rhythm section locked into a slinking groove that formed a solid foundation for the set, and despite a few issues regarding gear refusing to work mid-song, Motherhood’s set was definitely one worth catching.

Finally, Vomitself played a set of sludgy grindcore. Monolithic walls of distortion filled the gaps in between lengthy odysseys that writhed and thrashed as they morphed through time signatures and sounds. Guitarist Alex Galley played his instrument with such ferocity that it was drenched in blood by the end of the second track, due to his fingers splitting open from the technical shredding. Drummer Marc-Andre Richard pounded the T&L house drum set to a pulp while bassist Olivier Martell kept pace. Vocalist Anna Maltais shrieked like she was being branded by Satan himself, while the crowd headbanged through their hangovers to one of the loudest bands around.

After the afternoon havoc came to a close, four hours were allotted between sets to allow the bowling alley to host the couples bowling tournament. This gave the crowd time to regroup and imbibe some alcohol before the evening’s events. The latter portion of the shows focused on what the festival billed as “experimental dance music.”

Zack Bruce performed a set of skittering electronic music that turned the bowling alley into a rave awash in sweaty bodies. Bruce’s set was beautifully sequenced, transitioning seamlessly through hip-hop influenced future bass jams to Ryan Hemsworth-esque airy bangers. Bruce’s production displayed an excellent sense of sampling throughout, pulling material from sources as eclectic as Super Nintendo games and PC Music artist Sophie, appropriating and reimagining sounds until they became something completely indistinguishable from the source material. A remix based around the melancholy Donkey Kong Country 2: Diddy Kong’s Quest soundtrack gem “Stickerbrush Symphony” was one of the highlights of the set, with the track morphing into a dancefloor anthem that shifted through three different time changes as Bruce layered trap-influenced drum beats over the wonky synth of the original track. Bruce was transfixed with his gear throughout the set, looking intently at his equipment as he manically turned knobs on his mixer. The crowd gave in enthusiastically.

The evening was closed out by Vogue Dots, a two-piece synthpop act based out of Halifax. Awash in vibrant colors projected by a stellar light setup, the pair took to the stage dressed in all black to play a set of dreamy pop songs. Arpeggiated synth fell like a warm rain as the duo explored sonic soundscapes that unfurled slowly throughout their songs. Vocalist Babette Hayward sang ethereal melodies that lay under the synth in the mix, adding to the ambience of the set. Though the pair experienced issues with their gear, they took it in stride, performing around the malfunctioning equipment without allowing it put a damper on their set. Vogue Dots let the crowd wind down after turning up so hard during the previous set, and provided a perfect close to a day of noise and dancing.