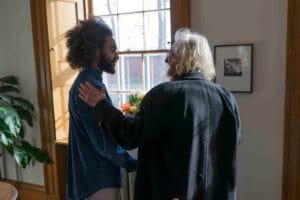 “It’s one of the longest projects – personal projects – that I’ve ever been involved in,” Adrian Kiva told me as we framed the photographs that would be his – and Cranewood on Main’s –  first art show, The Living Road. It opened on March 29 and will run until May 6. The show is comprised of 21 framed black-and-white prints made in the Purdy Crawford darkroom from medium-format negatives.

An evident a labour of love, Kiva handled every stage of the process leading to the show’s opening. The photography, of course, but also more overlooked aspects such as the careful photograph development, the aforementioned framing (specially ordered and paid for out of pocket before being assembled by hand), and even the placement of the nails required for his photographs to hang together or apart.

The works themselves are mostly photos from a fourth-year independent study on exhibiting as an artist with Kiva’s mentor, Thaddeus Holownia. It could be argued that the show was conceived then, or four years ago when, as Holownia put it, Kiva “plopped himself into my office and said, ‘I want to do a minor in photography.’ ” Or, if his mother can be trusted, when he initially picked up photography, following in his father’s footsteps. Whatever the case, Kiva has long been involved with photography and this show can be understood as the first culmination of his experience.

“This is about how I see things, but it’s also about all the relationships that I have. It’s a thank you for all the relationships and nature and all that, things that bring me deep, deep joy,” said Kiva. There’s no cynicism here; the show is entirely shots of nature and people, many of whom may seem familiar to Sackville residents. All the models are Kiva’s friends, roommates and his partner Hannah Longard, who is featured several times in The Living Road, as well as in his past works.

Unsurprisingly, there was a degree of trepidation on Kiva’s part leading to his show. “I think there’s a difference between … seeking to hear from the people you care about – your professors, people who you’re close with – as opposed to putting it out to everybody and saying, ‘Hey, I actually think this is worthwhile for you to spend your time on.’ And that’s a little scary.”

As hoped, the wide range of photographs seemed to appeal to the visitors. “The pairings of the photos, when they’re presented together, feels both natural and thought-out in composition and theme,” said Logan Doyle, a fourth-year cognitive science student, referring to the photographs Kiva organized as diptychs and triptychs. “It feels like they were put together, but they were meant to be together.”

Molly Bowes, Kiva’s friend, also commented on her appreciation of how the photographs felt natural. “I think all of that stuff [composition, etc.] is kind of second-hand to the way the photos make you feel,” she said.

With such a wide range of themes – “life and death, friendship and love, the environment and time,” according to an artist statement – it is unsurprising that they would need to be explored in a large-scale project. It is also unsurprising that people responded to different works for a wide range of reasons, though Kiva later told me that “People really like shirtless Sylvan.”

It feels necessary (read legal) for me to share that I am the Argosy’s managing editor, while Kiva is one of its two editors-in-chief. I helped Kiva in the later stages of the development; notably, my gloved hand can be found pinching his nose on the @mta_fineart Instagram page. I also helped him assemble the frames used in his show and used a level and measuring tape for something at one point too.