Practically perfect in every way 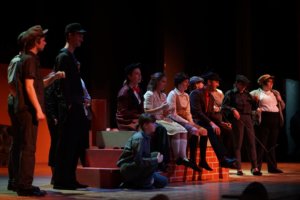 Garnet and Gold’s already-outstanding reputation was brought to a new level this weekend with the run of this year’s spectacle, Mary Poppins. Following last year’s beautiful performance of Hello, Dolly, the annual show blew the audience’s minds yet again.

Every aspect of the show felt magical from start to finish. Entering Cherry Tree Lane (otherwise known as Convocation Hall) immediately brought the audience into the world of the Banks family, the gorgeous set having been painted by the members of the cast and crew. The way that the cast moved naturally through the set made it feel as if, just like Bert, we too were members of the little universe that they flawlessly created onstage.

The costumes and props were nothing short of perfect. The fabulous costumes of the title characters drew the audience further into the story. Every costume fit as if it was made for the actors specifically. Personally, I could not keep my eyes off of Mary’s coat, an extravagant magenta piece that I was completely envious of. The props – which included an heirloom vase that was meant to be broken onstage, Mary’s famous parrot umbrella and a kite that blew us away as it flew away – brought another layer of fun to the already spectacular show.

The most enthralling part of the show, however, was the vocal and physical work of every single person onstage. No two characters felt the same; from the Banks family to the chorus to Poppins herself, every single member of the cast brought an individual light to the stage. Not only did their outstanding energy and passion shine onstage, but the gorgeous voices of these talented actors sent chills down my spine a few times. As a spectator, I was very impressed by the sheer talent that every single member of the cast exuded onstage, from the heartbreaking lullaby Being Mrs. Banks performed by Mrs. Banks herself (Mirren Lithwick), to the harrowing Brimstone and Treacle sung flawlessly by Miss Andrews (Sarah English). Another standout performance came with the final ties of the musical, as Poppins (Victoria Rust), Bert (Sam Unger), Michael (Fiona Clancey), Jane (Sarah Workman) and the chorus made jaws drop with Step In Time.

It wasn’t just the acting that had jaws dropping. The crew and the pit band brought the story to life through the beautiful lighting, flawless scene transitions and spine-tingling music. The technicians who appeared during the show, be it on stage during scene transitions or behind the soundboard at the head of the theatre, were so professional that it was impossible to tell that they are Mount Allison students. On the underside of the stage, the booming voices of the instruments in the pit brought us through every haunting, empowering, sad and enlightening part of the show flawlessly. Garnet and Gold’s production stands as a reminder that no show is complete without the people behind and below the stage.

Sweeter than a spoonful of sugar and cheekier than a chimney sweep, Mary Poppins was practically perfect in every way, thanks to hard work and long hours. Poppins herself says that anything can happen if you let it, and indeed, something magical happened with the help of an incredibly special group of people.