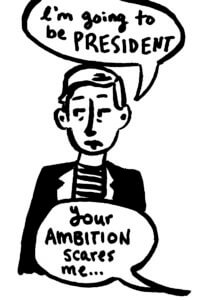 A poignant, highly satirized look at the world of overachievers

“Politics isn’t about policies – a candidate is elected on a story.”

If you had to guess which punchy political drama’s charismatic lead this line came from, you probably wouldn’t choose The Politician’s Payton Hobart, a high schooler from a rich family in Santa Barbara who wants, more than anything, to become student body president so he can one day become president of the United States.

The Politician on Netflix is “a show about moxie, ambition, and getting what you want by whatever means necessary.” The further you get into the first episode, the more you realize that all of these characters, who are treating their high school election like the be-all end-all event of their young lives, are just teenagers, though like Payton they also have political aspirations.

Payton is a complex character who softens over the eight episodes, played wonderfully by Ben Platt, who many will know from Broadway’s Dear Evan Hansen. Payton has been studying presidents since he was seven years old. His girlfriend Alice (Julia Schlaepfer) is willing to do whatever she has to do make sure that Payton wins, as are his campaign manager McAfee (Laura Dreyfuss, also of Dear Evan Hansen fame) and campaign co-chair James (Theo Germaine), all of whom treat the world of high-school politics as if it were the halls of government in Washington. Payton also gets moral guidance from his mother Georgina (Gwenyth Paltrow), whose love for her son outweighs all the kaftans money can buy. And she has a lot of kaftans and money.

But Payton is not without his enemies. His archrival is Astrid Sloan (played by Lucy Boynton, previously seen in Bohemian Rhapsody), who has manipulated her boyfriend River (David Corenswet) into running against Payton for student body president, knowing that River and Payton have a romantic past together. Payton is encouraged to find a running mate who humanizes him, so he chooses Infinity Jackson (Zoey Deutch), who is going through chemotherapy for cancer and is closely guarded by her grandmother Dusty (the closest the series gets to a dedicated villain character, played by Jessica Lange). River’s running mate Skye Leighton (Rahne Jones), who is on track to be the first gender non-conforming African American vice president at the school.

The series’ thesis statement can be seen in the theme sequence of the show, which is set to the song Chicago by Sufjan Stevens. In the sequence, you see all the things that make up the politician that Payton wants to be, as he is also literally made almost like a statue (I won’t go into specifics here, as there are a few cool Easter eggs that make the sequence worth watching as the show goes on, no matter how tempting the “skip intro” button might be). It’s an interesting way of presenting the main idea behind the series: are people born, or are they made in the image of who they aspire to be? Though the show is very satirical in its take on politics, both within high school and in real life, the question it’s asking is very human.

The show as a whole has an elevated take on current society and those who wish to help run it. Many of these high school students will do whatever it takes to win the election, and it comes with all the twists one would expect of a political drama – who’s beating who in the polls, the importance of picking a running mate, and back alley dealings to make sure you stay ahead of your opponent.

But the show also plays into the reputation of showrunner Ryan Murphy’s shows as a diversely cast, somewhat over-the-top soap opera. His other major credits include Glee and Pose. What is refreshing about this show, however, is that many of the LGBTQ angles of the show are not major plot points for the characters. It’s just who they are. This simple point of never having a character outwardly say where they are on the spectrum spoke volumes to me; that’s not what the show is about. People are going to love who they love and that is one side of them, but it’s not their main purpose in this story.

The first season mostly follows Payton and his quest for the presidency, but the stand-out episode to me comes at around the halfway point. It’s election day, and instead of following either candidate, the show decides to follow an undecided voter (a fellow student) through their day and their experience of the election. This is a new angle for political dramas, as it’s rare for them to focus on voter apathy. The voter claims he isn’t planning on voting in the school election because he feels his vote doesn’t matter, despite what both candidates and their teams are forcefully telling him. This is an episode that hits home especially hard in 2019 and 2020, as both Canada and the United States are gearing up for major elections and a majority of the voting power resides with the generation that has come of age since the previous election.

The tagline of The Politician is simple: “We promise to promise you everything.” I think it delivers on this promise. From the incredibly diverse and talented cast (it’s Jessica freaking Lange, people!), to the sharp writing with excellent plot twists and the cinematography as a whole, it’s got it all. Pair this with Payton’s hilarious, occasionally far-fetched quest for mass acceptance at the centre of it all, and the first season of The Politician gives its viewers something to hope for – an already-promised second season that’s just as good as the first.