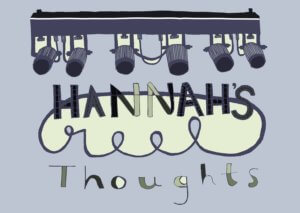 While I was scrolling through my Twitter feed this fall during various study breaks, I kept seeing people rave about a popular thriller from South Korea called Parasite. I’d only seen the posters and a GIF or two, all of which made me feel like the movie wasn’t quite my speed. As I mentioned when I reviewed The Babadook, I’m a weenie. I don’t do well with scary movies, and the poster and trailer for Parasite made it look a little like a scary movie. Besides that, it was also from South Korea and while it has subtitles for Western audiences, I was still a little worried. I can barely speak a language besides English, and I’m used to English films. Would I be able to keep up while reading the subtitles and paying attention to the action in the movie?

I stayed away from Parasite for a long time, even as it started racking up more and more awards, like the Palme d’Or at the Cannes Film Festival (the festival’s highest honour), the BAFTA award for Best Foreign Language Film and a Golden Globe in the same category. Parasite was also nominated for six Academy Awards, and deservedly so. The night before the Academy Awards, I finally sat down and watched it. It was late, I was a little tired, but I decided that if there was ever a time to watch Parasite, it was the night before it went on to win in some of the most prestigious award categories in Western culture.

I’m happy to say I made an excellent choice.

Parasite is a film about the poor Kim family. They are all unemployed, trying to scrape by on odd jobs, when family friend Min (Park Seo-joon) comes by. He gives them a scholar stone, which in Korean culture is meant to bring material wealth to the family, as a gift. He later asks one of the sons, Ki-woo (played by Choi Woo-sik), to take over his position as an English tutor for the daughter of the rich Park family. Ki-woo gets an idea after his first day: the Park family is gullible, so why not get the rest of his family employed? He pretends to barely know his sister Ki-jung (Park So-dam), or “Jessica” to the Parks, so she can be brought on as an art teacher for the younger Park child. Ki-woo’s father Ki-taek (Song Kang-ho) soon becomes the driver for Mr. Park, and after the family stages an incredibly clever heist, his mother Chung-sook (Jang Hye-jin) is the new housekeeper. Things start to unravel when the former housekeeper for the Parks, Moon-gwang (Lee Jeong-eun), comes back for something she left in the Parks’ basement. This secret is the catalyst for the end of the movie, one I can guarantee you will never see coming.

It is no surprise why this film ended up winning four Oscars – it is sharp, funny, and twists in a way that I never expected. You think you know what is going to happen when you watch this movie, but then there is a new development, and you’re left guessing all over again. Bong Joon-ho, the director and screenwriter of the film, does an excellent job of subtly setting things up just for them to come crashing down at the end. It is a shame that none of the actors were nominated in America for their work, as everyone in the film is excellent and never let the ball drop for a second.

Still, Parasite winning four Oscars is a triumph for the international film market. Not only does it mean that Western audiences are open to the idea of more diverse films (even those with subtitles!), but it also means that the Asian film industry now has a stake in Hollywood, one that it is bound to make good use of. Whatever Bong Joon-ho does next, he will have plenty more attention, but it will surely be just as stellar. As he said so poignantly at the Golden Globes, “Once you overcome the one-inch tall barrier of subtitles, you will be introduced to so many more amazing films.”

Parasite is not just one of my favourite movies of the year. It is one of my favourite movies ever. The script is so clever, the visuals are stunning, and the acting is some of the best I’ve ever seen on film. The scene where the family dupes the Parks into hiring a new housekeeper alone is worth studying in classes, as it is a pure masterpiece. Even if you’re wary of subtitles like I was, I urge you to give Parasite a try. It is the step in the right direction in terms of diversity among Western cinema both in front of and behind the camera, but it’s also just a damn good movie, and that alone is something worth celebrating.