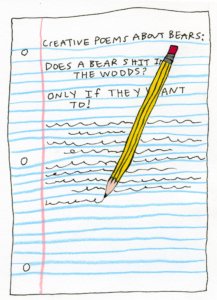 “The good thing about a society like this is that you get the chance to just express your own ideas, express your thoughts [and] do what you want to do,” said Justin Hughes, a third-year computer science major, who is co-president of the Creative Writing Society.

“I came into the school really excited to join the creative writing club because it was still advertised on the website as being active,” explained Tan. “Then I came here and went to the clubs fair. I realized that wasn’t the case anymore.”

Hughes, who came to Mt. A while the society was still active, never found an opportunity to attend. Later, when the society stopped meeting, he mourned its absence. Hughes and Tan got to talking at the beginning of this school year about the lack of a space dedicated to creative writing and decided to do something about it.

“I’m one of those people that really enjoy writing but with my schoolwork it doesn’t necessarily mean that I get a lot of time to do it,” said Hughes. “So that was another aspect of why I really like being involved with this club. It’s a dedicated space to creative writing and it allows me to challenge this side of me.”

“Writing has always been a part of my life … but as time commitments got greater I found it harder and harder to motivate myself in my free time [to] write,” said Tan. “I really wanted some kind of outlet that forced me to write creatively because I have a hard time focusing my efforts.”

Meetings start with a prompt written up on the board. For instance, the prompt at the last meeting was to write a story or poem about math. While some members worked on their own separate projects during the meeting, others focused their stories on math puns with hilarious results. About an hour and a half into the meeting, the group was encouraged to share their work if they wanted.

“It’s important to have a safe space where you feel comfortable with sharing your work and comfortable asking for help and feedback,” explained Tan. “I think it is really valuable for any kind of creative endeavours [and] that’s what we try to foster here.”

Those who attend meetings are welcome to spend the two hours working on whatever they prefer, whether that be schoolwork, personal creative work or a response to that week’s prompt. The meetings are designed to be a dedicated time to writing. Typically a dozen or so people show up each week, and although not everyone shares their work, everyone spends the time writing. Snacks are provided.

“I just think creativity is a really important thing and it’s something that’s not really valued in most classes,” said Tan. “Even [in] English classes and the like, it’s very much about composition and analysis and not very much about expressing yourself. I think that’s a really important thing to do – not only as a relaxing outlet but also as a method of self-discovery.”

The Creative Writing Society meets Thursday nights from 7 to 9 p.m. in Avard-Dixon 120. If you’re looking for a dedicated writing time or a space to share your work, be sure to check it out.