Sackville gets a taste of global flavours 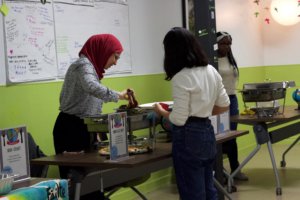 On Oct. 25, the Sackville Commons was transformed from a quiet community centre to a vibrant, bustling hall full of town residents and students from around the world. Tables were set up throughout the main hall, with dozens of international students from nine different countries showcasing their local cuisine. Students waited in line to have henna art painted on their hands, searching through their phones for the perfect design. This was the World Bazaar’s 16th year in operation, and it was as lively as ever.

The World Bazaar, run by Mount Allison’s International Centre, was first organized in 2003 and has been an annual tradition since. The event allows international students to cook food from their home countries, and members of the local community are welcome to purchase tickets and try a variety of cuisine.

The Bazaar has traditionally been held in the Sackville United Church at the same time as Sackville’s Midnight Madness event; however, this year, the Bazaar moved locations and opened two weeks before Midnight Madness.

“In the past, we were in the United Church. It’s a great venue, but they don’t have as big of kitchen facilities,” said Mason. “The Commons allows for students who don’t have kitchens in residence to participate.” The Bazaar’s venue change did not appear to harm its success, with students from nine countries participating in the event.

“There’s so much diversity in the food [at the Bazaar],” said Mt. A student Oorja Gonepavaram. “You don’t get to eat like this when you live in residence and eat at Jennings every day. This is a great mix of foods, and it’s cheap and tasty.”

“This is Coca-Cola chicken. It has some sweet and sour flavours together, and it’s very complex,” said Weiting Li, a Mt. A student from China, as she proudly displayed the Southern Chinese specialties she had spent two hours preparing earlier that day. “And these are rice cakes made with brown sugar that are sweet and sticky.” In under an hour, both dishes had sold out.

Other dishes included Scottish shortbread, Liberian fried greens, Lebanese tabbouleh and Taiwanese braised pork. In addition to food, visitors to the Bazaar could also purchase mehndi designs on their hands, drawn with henna that Gonepavaram had brought from India over the summer.

Many of the international students had participated in the Bazaar in previous years, and could anticipate what to buy in advance in case certain supplies or ingredients were not available in Sackville; however, many dishes still required innovation to adapt to which ingredients were available in Canada.

Minaho Ae, a member of Mt. A’s multicultural organization MOSAIC, prepared takoyaki, Japanese grilled balls traditionally filled with octopus. Instead of octopus, Ae filled the takoyaki with sausages and fish powder to create a “Canadian version,” and used sauce she had brought from Japan in anticipation of this year’s event.

Maisaa Al Tamki, an international student from Syria, participated in the World Bazaar for her third time this year. This time, she prepared stuffed grape leaves filled with rice, vegetables and meat, as well as a fried eggplant dish with yoghurt and tahini. She went on to describe the importance of accommodating multiple diets, noting that, “There is beef in the grape leaves, and not all people eat beef, so I made one with beef and one that’s vegan.”

Many of the students who prepared food for the Bazaar expressed an appreciation for the event’s ability to unite students from all backgrounds and open up a dialogue about various cultures.

“It’s nice because you make people know about your culture,” said Al Tamki. “Food is a part of all cultures. People usually stop when they come to get food, and ask ‘Where do you come from?’ and ‘How do you make this?’ and all these questions about your country. I think it’s good.”

Mason seconded these thoughts, emphasizing the event’s ability to create cultural connections: “I think it’s a way to experience and connect with other cultures in a really fun way. Students love sharing a piece of their culture in this way, and I think that food really brings people together.”