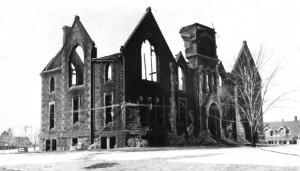 Sackville: Then and Now a must-read history.

For most students, Sackville’s history begins with their first year at Mount Allison University, and ends with their last. The transient nature of the town and its residents can make it difficult for students to look beyond their own experiences in Sackville, and connect with the area’s surprisingly rich history. Sackville: Then and Now, a book of photographs and history by Charlie Scobie and Kip Jackson, remedies this problem. The book renders Sackville’s history interesting and accessible to readers through engaging text and photographs that compare historical landmarks to contemporary settings.

The book uncovers little known elements of Sackville’s history through archival and anecdotal exploration. Composed largely of photographs depicting both the current and past states of recognizable locations, such as the downtown core, the campus, and the surrounding residential areas, the book gives readers a rare insight into Sackville’s evolution over time. The earliest photographs presented in the book date back to 1862, while the contemporary photos were taken in 2012 and 2013.

Many of the historic photographs depict landmarks and structures that have disappeared from the town’s contemporary setting. These images help bring lost elements of the town’s history back to life. One piece of history that was of particular interest to me was that Sackville used to house an active harness racing track. The racetrack operated from 1945 until 1959, when the site was expropriated to form what is now exit 506 on the Trans-Canada highway. If the track still existed today, it would be found in the vicinity of the Westmorland Animal Hospital, the Tantramar Motel, and the Ultramar gas station.

The archival photographs in the book are beautifully restored and accurately portray the distinctive style and aesthetic of the periods. Some of the book’s most striking photos document fires that destroyed or damaged town establishments.  The photographs and textual information about the downtown area are also fascinating, as they reveal that many of the town’s original buildings are still in use today. The space that currently houses The Black Duck, for example, used to be another restaurant called the Oscar Tracy lunch room that operated from 1900 until 1910.

Although Sackville: Then and Now was compiled primarily by Scobie and Jackson, the book’s creation was also a community effort. Sackville residents contributed old photographs and stories in an effort to create a holistic account of the town’s history. The collaborative approach to the book’s creation is representative of Sackville’s emphasis on the value of community. As the authors wrote in the book’s preface, “it is only fitting that a book produced about Sackville should be produced by the community it describes.”

Scobie and Jackson emphasize the importance of the preservation of the town’s historic landscape in the book’s preface—a timely statement given the recent discussion about the potential destruction of the Sackville United Church.

“[…] Sackville’s connection to its unique past is lost each time a heritage property falls into disrepair and is eventually destroyed. This book will act as a reminder of what Sackville stands to lose if this trend continues,” they wrote.

Sackville: Then and Now is a joint project of the Tantramar Heritage Trust and The Town of Sackville Heritage Board. It is now on sale at Tidewater Books.