Strangers, storms, and sips of coffee 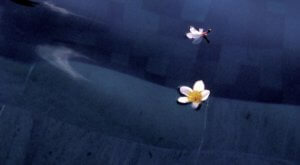 How Tintamarre breaks barriers with hilarity and diversity

Right in the heart of the Mount Allison campus, a group of wildly diverse characters have been conversing over coffee in the cluttered-yet-cozy Café du Quai since September. Don’t be shocked if you haven’t heard of it, though – the café’s lush orange walls and mysterious paintings are part of the world behind Nomade, Tintamarre’s annual production through the Motyer-Fancy Theatre.

Tintamarre is Mount Allison’s long-running bilingual theatre troupe that celebrates cultural differences and comments on the changing world. Directed by Alex Fancy, the collaboratively written plays have been sparking joy and provoking thought in our community for decades, and not just at Mount Allison: 2020 will mark the 33rd year of the Tintamarrathon, which brings the most recent Tintamarre production to schools across the Maritimes each year. According to Fancy, 150,000 grade-school students have experienced the Tintamarrathon since its first tour, and the tours show no signs of stopping any time soon.

“Tintamarre is an organic community of people who are passionate about theatre and about the role that theatre can play in our world in a time of unprecedented change,” said Fancy. “The people in Tintamarre are all volunteers – they are all very committed to this role of theatre, and they are also very respectful of each other and believe in the importance of safe spaces.”

Associate director Caitlin O’Connor – who also plays Ernestine, a former fisher and current conspiracy theorist, in the current production – described Tintamarre as “an environment that not only allows you to explore, but also to celebrate having fun in more than one language, as well as different cultures, identities and things happening in our world.” As a student, she believes that Tintamarre has been “like a home within the greater community of Mount Allison.”

When asked who Tintamarre is looking for, associate director Noémie Chiasson, who also plays Café du Quai’s hard-working owner  Doris, enthusiastically exclaimed, “Everyone! We don’t discriminate, there’s no auditions.… It doesn’t matter how much experience you have in theatre.”

Tintamarre celebrates and encourages diversity within its cast, and this year is no exception. The 11 cast members of Nomade – actors of vastly different ages, programs of study, hometowns and stories to tell – have made the process of creating the show refreshing. The cast members have developed incredible bonds with one another since their first meeting in September.

Of course, the café would simply be a blank stage without the tech crew, who have been dedicated, creative and outstandingly helpful in the process of creating the show.

“It takes a village to make a play,” said Fancy. “Part of the magic of theatre – and this is true here, since so many people have contributed to the making of the play – is the growing realization that the final product is so much larger than the sum of its parts.”

This year’s production is as interesting as it is relevant. As a silent stranger passes through the small town of Port-à-Petit, the storm of the century follows close behind, leaving the patrons of Café du Quai trapped within, and for some, trapped within the barriers of their own ignorance and fear.

Despite the serious subjects of fear of the unknown and climate change, however, the comedic play is a hilarious celebration of diversity, love and community.

“What’s great about this play is that we’re addressing serious problems that are happening at the moment, but we’re also using comedy to make the subject easier to explain,” said Chiasson.

“Without comedy, without engaging the spectators, we can’t accomplish our goals, because it’s a comedy that opens people’s hearts and minds,” added Fancy.

If you have 70 minutes to spare and a yearning to find the joy of the unknown in a tiny Maritime café, consider taking a trip to Port-à-Petit in Tintamarre’s Nomade!