Energy East was cancelled, and I promise that’s good news 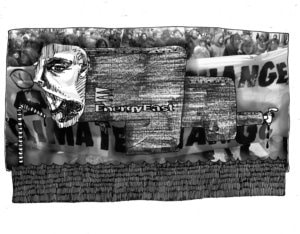 Thousands of new jobs and national energy independence were promised to New Brunswickers and all Canadians when plans for the Energy East Pipeline first emerged in 2012. The pipeline proposed by TransCanada Corp was to carry 1.1 million barrels of bitumen (nearly solid, tar-like oil) daily from Alberta to terminals in St. John. The project would have been the largest capacity oil pipeline in North America.

Analysts speculate that the pipeline was cancelled for market-related reasons and the National Energy Board’s recent decision to factor upstream and downstream emissions into its project evaluation. Thanks to the years-long efforts of Indigenous peoples and front-line communities, Energy East would have been the first Canadian project of its kind to undergo this analysis. Previously, the only emissions calculated for a pipeline were those from transporting bitumen from point A to B. As a result, calculations were incredibly inadequate, failing to illustrate the entire horrific Hieronymus Bosch-like picture.

Should global temperatures increase beyond 1.5 to two degrees celsius above pre-industrial levels, it’s been accepted that the 7 billion people on this planet would face catastrophe (though maybe not by those five guys who hold half the world’s wealth). Considering we’ve already experienced an increase in temperatures by one degree, the last thing we need is a pipeline carrying 1.1 million more barrels of the world’s most energy-intensive oil to market every day. The catastrophic global warming that scientists have warned us about since the ‘90s is already here, with the last few months bringing devastation from hurricanes Harvey and Irma, forest fires in BC and California, and deadly heatwaves across the globe.

If this doesn’t scare you, and your concern rests with the economy, note that cited market-based reasons for the cancellation are entirely accurate. There isn’t the market for tar sands oil in 2017 that there was in 2012. The price of oil has dropped to critically low levels; compare today’s price of $50 per barrel with 2012 prices of $110, and it’s easy to understand why TransCanada is no longer super keen to invest $16 billion dollars in the project. With auto manufacturers like Volvo, Land Rover and GM announcing emissions-free fleets by mid-century, and nations like France, Germany and China banning fuel-combustion engines in the coming decades, there isn’t market demand for new infrastructure when typical lifespan for a pipeline stretches into decades.

Although concerns about job losses and energy independence seem legitimate, they fail to reflect the truth, as the majority of jobs created by Energy East were temporary, and 85-90 per cent of the bitumen reaching St. John was destined for foreign markets. Though the oil carried by the pipeline wouldn’t have contributed to the nation’s energy independence, increased support for renewables would. As of 2014, there are already more Canadian jobs in renewables than in the tar sands. In addition to sheer numbers of employment opportunities, professions in wind and solar energy are far less likely to result in labourer illness than those in the fossil fuel industry. With renewables forming the bedrock of the future economy, green sector careers can employ labourers for decades to come.

TransCanada pulling the plug on this project was good news, whether we’re considering social, economic or environmental factors. This pipeline was too costly, and its cancellation frees us to move into a future where renewable energy, safe jobs and the wellbeing of peoples on the front lines of climate change are prioritized.