My Saturday hangover simply refused to subside. After drinking approximately 11 gallons of water, inhaling a mountain of hash browns and popping half a bottle of Advil, the throbbing pain behind my right eye continued to dance down my neck. It was a pain, I realized around dinnertime, that IPAs and cigarettes alone could not have induced. No, this kind of pain could only have spawned from the deafening silence that follows an evening of melodic palpitations with Zack Bruce and Justin McKiel.

McKiel started off the night with a melodic mishmash of disco and bass-heavy dance music, playing directly from his collection of records, then sampling some throwbacks in his own hybrid creations. 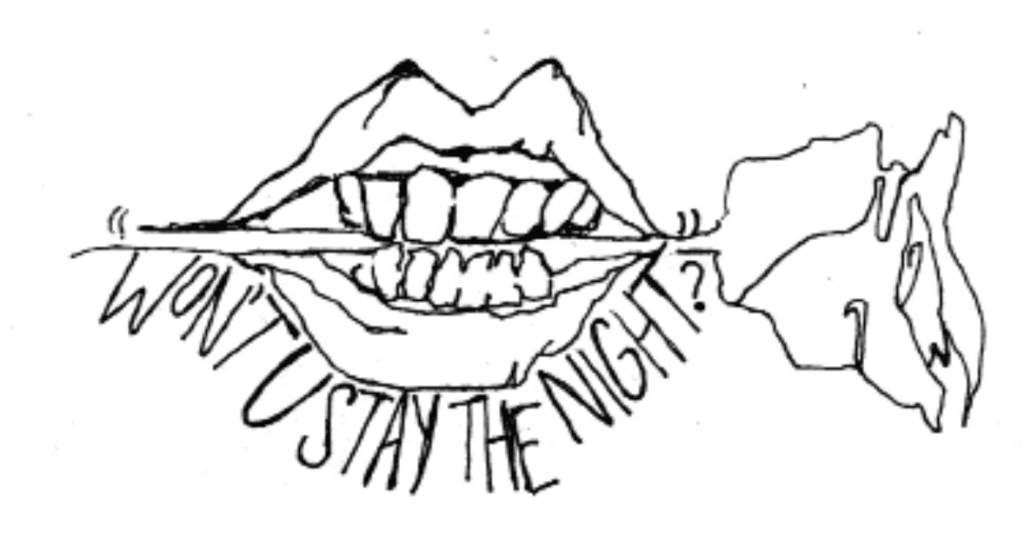 Closing McKiel’s set, Mark Cruz made a much-anticipated cameo following his recent release of “Stay The Nite,” a soulful, lusty tune with an unmistakable nod to Prince. As if the room were not already hot enough, Cruz, performing under the stage name Playboi PT, serenaded us from atop a speaker. Shirtless under a navy blue vest, he belted out the auto-tuned power ballad while somehow simultaneously holding a rose in his mouth.

In the evening’s second set, Bruce and McKiel joined forces and zapped the already-grooving bodies into a frenzy. Given the totality of the bellowing drops and silky transitions that had the room pulsing, I could understand someone mistaking its originator for some dulcet deity. Yet, at the front, fiddling with knobs and toggles in a labyrinth of electronic equipment, stood the two almost comically humble-looking performers, smizing sheepishly through their moppy hair at the writhing, worshipping horde.

The dancing disciples moved so unabatedly that they bumped into the DJ table a few times and unplugged some of the musical equipment, causing the sound to cut out momentarily. Other times, the track would skip backward 10 seconds, and McKiel and Bruce had to frantically reconnect and reprogramme the devices before the songs ended.

“It was kind of a compliment that it was going so horribly. Because everyone was dancing so hard, we couldn’t play our set properly,” McKiel said. “It was kind of stressful in that way. Next time we’ll have a little fence or something.”

Bruce and McKiel have been making music together for several months now, sending samples back and forth at their leisure. But when Bruce arrived in Sackville from Montreal last Tuesday, they worked together incessantly after their day jobs, putting in more than 30 hours before the show.

“The majority of our time spent together was not preparing the set in a performance way – we only really did that the night before – it was mostly producing the music with each other,” McKiel said. “We definitely took on too much, but that was what was fun about it.”

In that time, the duo produced and recorded a song with Sadie Donahue, a third-year music student at Mt. A. At the show, Donahue, who is used to performing with either a guitar or a band, danced on the speaker as she sang their cover of JoJo’s 2006 synthy hit “Like That.”

“It’s a super hot song, but they remixed it in a way that was kind of dancey, so that was fun,” she said.

It wasn’t until emcee Reuben Matthew announced that Bruce was performing next with a solo set that I remembered I was supposed to report on the show. I had been dancing non-stop for well over an hour, and any subsequent effort I made to stoically observe the proceedings was swallowed up by the churning crowd.

If you’ve ever had the pleasure of witnessing Bruce play live, then you’ll know that writing about the experience is a futile endeavour. Bruce, who grew up in Sackville, studied sound engineering in Halifax. Now a member of GIRTH, he also composes and produces his own work and has started performing in Montreal. He and McKiel intend to make more music together in the future.

Bruce’s set was both sleek and brazen, a refined concoction of rapid and sometimes syncopated beats, tumbling bass lines and undulating transitions that let us sway to catch our breaths before convulsing once more. I could be wrong, but I believe it was during this part of the show when the mosh pit formed. And let me tell you, nothing brings together a community quite like shoving acquaintances to the beat of Bruce’s incendiary earworms.

The night was one of the busiest T&L has seen all year.

“It seems that Zack and Justin particularly were kind of scratching an itch musically that we don’t really get [to see performed] live that often in Sackville,” Cruz said.

On the verge of spontaneous combustion, I eventually crawled out of the pit and stepped outside for some thermal relief. My wet hair stiffened as friends smoked on the sidewalk, where we could hear the muffled drone still commanding bodies on the dance floor.

“Tonight brought everyone together, which I feel needs to happen more often,” Matthew said.

It was one of those nights I’ll look back on in 10 years and, in nostalgic amnesia, pretend happened every weekend. Walking home, the imminent pain of the morning was the last thing on my mind.