The art of the valedictorian address 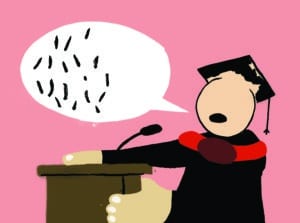 With the slowly rising temperatures, lengthening days and upcoming finals-season panic, spring’s arrival feels imminent. For many senior students, spring brings something else to look forward to: graduation. Apart from the speeches and distribution of diplomas, an important part of the collegiate graduation tradition is the valedictory address.

It was announced last Friday evening that Isaac Gazendam will be writing and presenting the valedictorian speech at this year’s convocation ceremony on May 15.

“I wanted to be valedictorian because I’ve had the privilege to meet and connect with such a wide variety of my peers over the last four years,” Gazendam wrote in an email to the Argosy. “University was in no way an easy ride, either for myself or for most of the graduates who will be sitting in Convocation Hall this May. It was challenging on many levels and I think we often forget or minimize this amazing accomplishment.”

Gazendam hasn’t decided precisely what his approach will be to deliver his message, but he remains open to ideas. “Every single person has had a different experience during their time at Mount Allison, and so I would hope to reflect both the diversity of our experiences and also all that we have in common. I want to celebrate, reflect, and inspire us to take with us what we have built and learned as we move outward and onward from Mount Allison and Sackville,” Gazendam wrote.

One of the other valedictorian runners plans to provide Gazendam with input. Sarah Murphy, who majors in anthropology, wants to hear a speech that celebrates Mt. A’s close-knit community.

“Our experiences here have really been tied to the people that we’ve met, people who have been teachers to us [as both professors and peers]. Leaving here is daunting because we don’t know if we’ll have that familiarity in our next step,” Murphy said. “The tools we’ve gotten from our experiences at Mt. A will help us recreate that wherever we go next. That’s something I’m definitely going to speak to Isaac about.”

Despite how keeping spotlight on congruity was emphasized by each candidate in their pre-election campaign speeches, disagreements arose amongst the candidates about how the speech should be written and what aspects should be focused on.

Petersen, who is graduating with an honours in biology, suggested that differences between arts and sciences students are too great to be ignored. “They choose only one valedictorian, and there are two different ceremonies, one for the arts and one for the sciences. I felt that it would be a concern if an art student was talking on behalf of a science student,” Petersen said. “Our experiences through our degrees have shaped who we are. I wouldn’t be the same person if I was an arts student. As a science student I’d want somebody who understood my experiences of staying in the lab for three hours, or doing research for hours on end.”

However, differences over the purpose of a valedictorian and the valedictory address were few. Mitchell Gunn, who is graduating with a double major in English and psychology, expressed his dissatisfaction with the run-of-the-mill model of the typical graduation ceremony.

“So much of what happens at convocation, like putting on the gowns and crossing the stage, is really part of a checklist. They’re all nice, formal things, but they’re not necessarily done for you. They’re done for the University,” Gunn said. “I think the valedictorian address is … all about us telling our story and reliving our experiences. The valedictorian’s job is to tell that story the best they can.”

Students and family members can anticipate that Gazendam’s speech will take into consideration opinions like Gunn’s. “We are graduating into an increasingly uncertain world, and I would love to provide my peers with a message of hope, recognizing that we are prepared to take on any challenges life throws our way,” Gazendam said.