Leadership isn’t about sitting in the boardroom 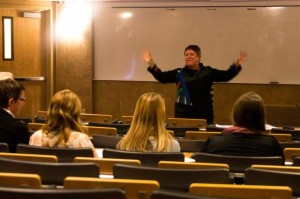 It’s easy to support the argument that women should be in more positions of leadership. It’s harder to challenge how we define leadership, and to question what it is we wish to become leaders of.

This past Friday and Saturday, ahead of International Women’s Day, Mount Allison University hosted its first ‘Women in Leadership Conference.’ Co-chaired by fourth-year students Eilish Elliott and Heather Webster, sponsored by the Ron Joyce Centre for Business Studies, the Mount Allison Alumni Board and several other branches of the university administration, the conference’s intent was to “start a discussion on campus around women in leadership and the barriers women face in leadership roles, as well as provide participants with the opportunity to develop tangible skills that they will be able to use in getting involved and taking on leadership roles.”

The problem with the conference wasn’t that it asked how women could take on more leadership roles. The problem was that it continued to spread the myth that women can end sexism so long as they’re willing to step up and do so. It advanced the all-too-common “If women work hard we can run the world” mentality, without ever stopping to ask the question, “But what kind of world would we be running?”

The conference’s website begins by asserting that “despite Mount Allison’s population being 60 per cent female, we see few females seeking and obtaining leadership positions on campus, and this extends into the professional workforce.”

After spending four years at Mt. A, I can assure you that there is no lack of female leadership at this institution. In fact, I would argue that women make up the majority of the individuals and groups at Mt. A who are committed  to and working towards progressive social change, both on campus and beyond.

If we continue to define leadership in a restrictive and hierarchical way which sees “leaders” as only those who have a seat on the Students’ Administrative Council, or an executive position in a club or society, we’ll never bring about the transformative change that will benefit all women. By adopting such a restrictive view of leadership, we’re telling others, “This is success and these are the skills you need to get there.” But we are not stopping to broaden our gaze and reflect on the very real female leadership that is taking place around us.

“Female leadership” at Mt. A is the 22 young women who brought women’s lived experiences to the stage in The Vagina Monologues.

It is the executive of the Black Students for Advocacy, Awareness and Togetherness who, after dealing with years of racist micro- and macro-aggressions, pulled back Mt. A’s ‘accepting community blanket’ and catalyzed a critical conversation on racism at this institution.

It is the six female co-ordinators of Divest MTA who have navigated the rhetoric of fiduciary responsibility and have called into question the moral responsibilities of this institution.

Female leadership is Madeleine Kruth, who, after opening an administrative email dismissing reported sexual assault rates on Canadian university campuses, had the courage to publicly come forward with her experience of rape and demand concrete action from this university’s administration.

We need to move away from this ‘keeping up with the men’ mentality that the conference advanced so well. On their website, they posted a quote from Facebook executive Sheryl Sandberg’s book Lean In, a New York Times bestseller that created its own branch of feminism. In giving Facebook a sociopolitical cause to champion, Sandberg throws a feminist blanket over capitalism and tells women that if they want to change the world, they need to sit at the boardroom table and “lean in.”

It was a message echoed by the conference’s keynote speaker, Nancy McKay, a physiotherapist and three-time Progressive Conservative party candidate, who opened the conference on Friday evening with a clear message: “Women need to be in positions of leadership and in order to get there, they need to step up.”

This type of feminism isn’t about asking corporations or organizations to dismantle their institutionalized sexism, it’s about telling women to suck it up and get over it. When McKay was asked how she handles sexism in the workplace, she responded by saying that a good sense of humour goes a long way.

Intentionally or not, in saying this, McKay was really saying that laughter is an appropriate response to a guy sitting in a fourth-year sociology seminar equating women being raped while walking home alone to getting shot while driving a Cadillac through the Bronx. With this, we’re told that humour is an appropriate response to not only sexist jokes but also to racist, homophobic and transphobic ones alike. We’re told that whether it’s in the classroom or the boardroom, sexism is a reality that we, as women, need to get used to.

However we wish to put it, whether it be “stepping up” or “leaning in,” we’re failing to acknowledge the fact that privileged white women can’t step up or lean in without doing so at the expense of others. As author Laurie Penny puts it, “Lean In is predicated on the notion that you’ll also be leaning ON immigrant women, women of color, and poor women.”

While the Women in Leadership Conference may be willing to acknowledge this is a problem that must be overcome, it doesn’t take away from the fact that their 20-plus guest speakers, panellists and networking participants were all well-educated white women and men.

We need to stop pretending that we’ll have achieved gender equality when we have a white female corporate elite sitting in the boardrooms of multinationals around the world. Instead, we need to remember that the visionary feminist goal is not for women to run the world, but for women to collectively and co-operatively change the world into one which extends freedom, justice and opportunity to all people.