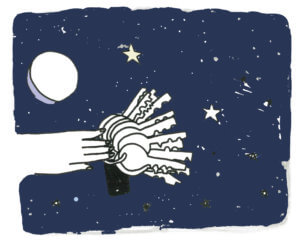 Negotiations between Mt. A and CUPE 2338 to begin over the summer

Members of the Mount Allison community are pushing back against proposed changes to the custodial schedule which could cause “severe strain” to the lives of affected custodians. That is the view of Dave Thomas, a political science professor and one of many faculty, staff and students who are supporting the workers.

On April 9, a shocked Hiroshi Kawai left a meeting with Campus Services to visit his wife Angela Thibodeau, who is the administrative assistant for the departments of classics, philosophy and religious studies in Hart Hall.

Kawai, who has been a custodian at Mt. A for 10 years, had just been told that management had proposed changing his shift from daytime hours to 3 to 11 p.m., beginning in September. The changes would affect nine custodial positions.

Kawai said he and the others present were told by Campus Services Management not to let the information leave the meeting room. Since this meeting, the custodians have been told by Facilities Management that they are free to speak about the issue, but all have declined to speak with the Argosy due to the nature of the situation. The following information about Kawai’s experience has been provided by Thibodeau, his spouse.

When he first began working at Mt. A, Kawai worked night shifts, changing to day shifts after five years because of health issues. Even if Kawai is not made to switch shifts, he and Thibodeau do not want other custodians to have to take on night shifts, which they fear can have detrimental effects on the health and home lives of employees.

Kawai and the other custodians were not provided with clear reasons for the changes, according to Thibodeau.

Thomas said he first heard about the situation through word of mouth from friends and colleagues like Thibodeau and Kawai. “It is unfortunate that people working in academic buildings were not consulted or informed of this through any official channels,” said Thomas, who responded quickly to the information. “My response was that we needed to do something immediately to support the custodians. This is when word started to spread, and people were encouraged to send emails directly to the managers of the custodians, cc’ed to other administrators at the University.”

Thomas said that “No rationale has been provided to the community that would warrant such a drastic upheaval in the lives of our custodians, even when we have asked managers directly in emails. Everything I’ve heard about these events sounds like a horrible situation for the custodians. The custodians are members of our community and shouldn’t be treated like this.”

While they do not have exact numbers, Thomas and Thibodeau said they both knew of many faculty, staff, students and alumni who responded to the situation, through email or otherwise. Thibodeau said faculty and students in Hart Hall approached her to voice their support and concern and to tell her that they had sent an email to campus services about the issue.

In an email obtained by the Argosy, Donna Hurley, manager of Campus Services, wrote in response to such inquiries, “Please note we are in the very early stages of implementing changes to a limited number of custodial positions in a limited number of buildings. This would involve a shift beginning at 3 p.m., a schedule similar to that worked by other University employees. The evening shift would be in effect from September through November and January through March each year, with employees having the option to return to a day shift for the other six months of the year. There are no plans for layoffs or for overnight work as part of these changes.”

The email continues, “All Facilities Management employees, including custodians, are valued members of the University community. Custodians have been, and will continue to be, fully involved in the implementation of these changes. In addition, as members of CUPE 2338 [the union for trades, groundskeeping, custodial and security employees at Mt. A], they have specific rights within their collective agreement, including rights related to these types of situations. The University respects these rights and is also working with CUPE 2338 leaders as part of this process.”

The Argosy obtained at least three copies of this email from faculty and students who had contacted Hurley.

Thomas said he hopes “to see the custodians’ union do everything in its power to make sure that no custodian is forced to make the switch to nights against their will.”

It is unclear whether the decisions being made by Campus Services Management are in accordance with the most recent collective bargaining agreement.

Article 23 of the agreement, which can be found on the Mt. A website, outlines standards and exceptions for hours of work. This collective agreement covers the period from July 1, 2015, to June 30, 2018.

It proceeds to outline exceptions to these regular hours of work for custodians. The exception for night shifts reads, “Custodians in academic buildings on night shift shall normally work a thirty-five (35) hour week consisting of five (5) consecutive shifts of seven (7) hours each, Sunday through Thursday, from 5:00 p.m. to 12:30 a.m., with a half hour unpaid lunch break.”

In terms of schedule changes, the agreement states that the employer may establish abnormal schedules for short-term periods in consultation with employees. It asserts that “Abnormal schedules may only be established by mutual agreement,” and those changes must be outlined in written notice to the union.

Referring to employer-initiated schedule changes, the agreement reads, “Through attrition or through exceptional circumstances, subject to operational requirements, changes to the normal hours of work and/or to the normal work week, as outlined in Article 23, may be made by the Employer in consultation with the Union.”

The employees’ union that includes custodial employees, CUPE 2338, has officially taken on the issue. Thibodeau said that some custodians are optimistic about the dialogue between the union and management, while others are discouraged by the way the process has unfolded.

In an email to the Argosy, Steve Butler, the local president of CUPE 2338, said he is grateful for the interest in speaking about the plans but cannot comment on the specifics of the situation.

“Unfortunately I cannot comment at this time due to a freeze put on these plans,” Butler said, “because we have decided to take them to the table for discussions during our contract talks. Hopefully we can either come up with an alternative to their plans or try to convince them to rethink the situation all together.”

Hurley wrote to the Argosy that “The custodial department staffing item has been referred by agreement to collective bargaining, which are expected to start over the summer. Therefore, we are not at liberty to discuss these specifics at this time.”