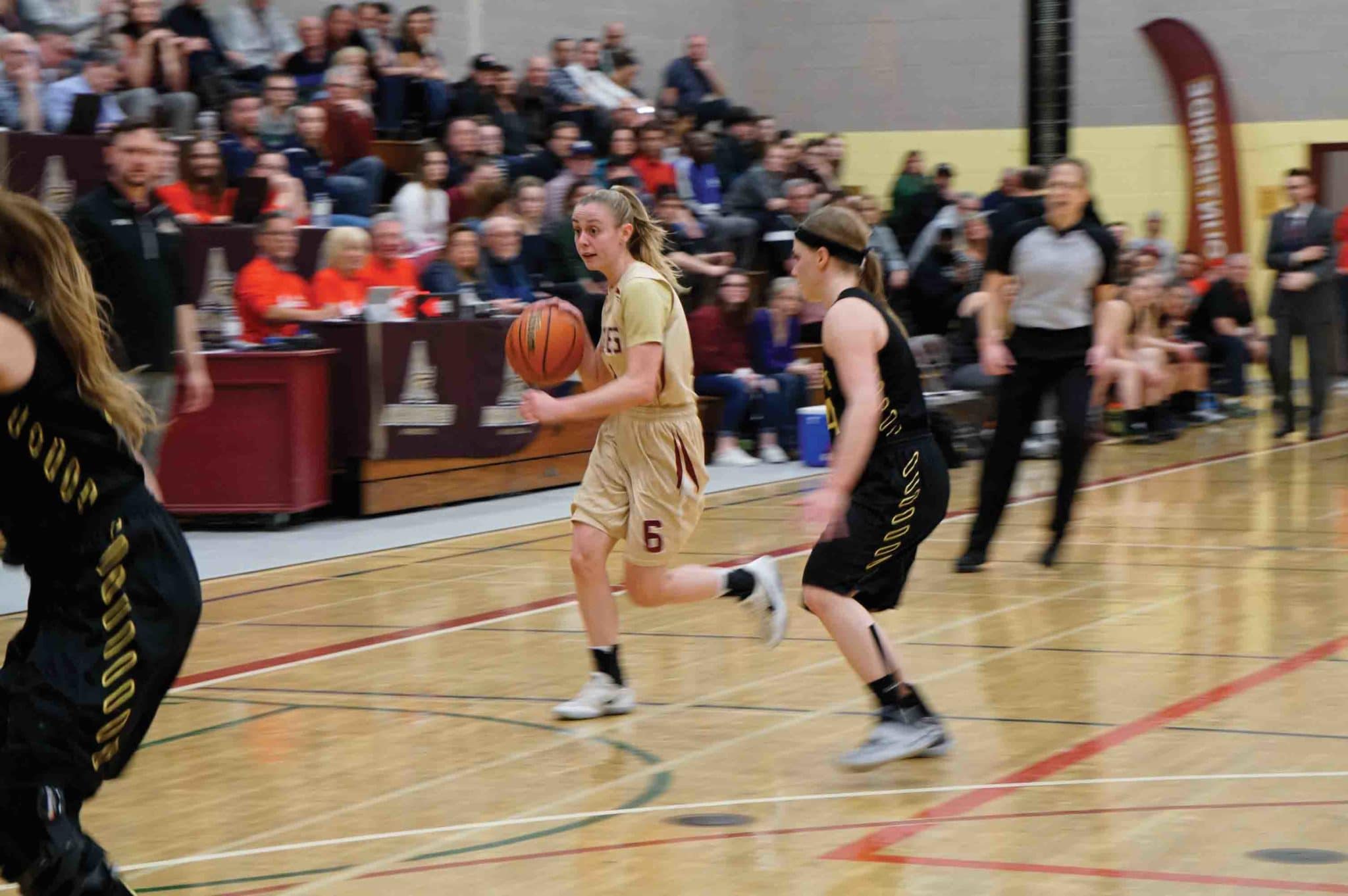 The McCormack Gymnasium was uproarious last week as the women’s varsity basketball team hosted seven of the top teams from across the country in the CCAA Basketball National Championships.

In the Mounties’ first game against the Medicine Hat Rattlers on Thursday, spectators struggled to find seats as the bleachers filled with hundreds of excited fans. With the crowd behind them, Mount Allison came out to a hot start and went into halftime with a commanding 25-20 lead. Keeping this lead for most of the game, the Mounties defeated the Rattlers 61-49. The Mounties’ starting five commanded the offence, scoring 53 of the team’s 61 points. Kiersten Mangold, a third-year player for Mt. A, led the way, scoring 20 points and adding 14 rebounds.

“The crowd was great and getting the chance to play in front of a home crowd at the national level is something I won’t forget,” said fourth-year player Sarah McGeachy, commenting on the atmosphere in their home gym. “The crowd gave us so much energy and really demonstrated what Mountie pride means.”

Advancing to the semifinals, the Mounties were matched up against the undefeated Dawson College Blues, who went 14-0 in the regular season to win the RSEQ league. Unfortunately, the Mounties fell 65-53 to the Blues 65-63 at another packed event on Friday night. The crowd was so loud during parts of the game that the Blues took timeouts at centre court because the rambunctious Mounties fans yelling behind their bench prevented them from hearing their own coach.

With the loss, the Mounties were set to face the Mount Saint Vincent Mystics, their conference rivals from this year, in the qualifying game for the bronze medal match.

Coming out strong against the Mystics, the Mounties finished the fourth quarter down 15-14. The second quarter remained close, but saw the Mystics go into halftime with a 35-24 lead. An aggressive full-court zone press by the Mystics caused continuous turnovers. The Mounties struggled to respond offensively and finished the game with an above-average 28 turnovers, with the Mystics recording an astounding 21 steals. The Mounties ended up losing the game 65-50, ending their season tied for fifth place overall. MacEachern shot an impressive 8-12, finishing with 16 points to lead the Mounties, while adding two blocks on defence.

“I was really pleased with the attendance and engagement of the fans,” said Norval McConnell, the chair of the event. “The tournament will be memorable for everyone who participated and all who attended.”

The event could not have been a success without the dozens of volunteers who helped set up the tournament. “Volunteers make the world go around and this event was no exception. It all worked because of them,” said McConnell, who graduated from Mt. A in 1980.

McConnell specifically thanked a few other individuals. “Rob Hiscock and the ladies from communication used social media and traditional media to really spread word of the tournament,” he said. He also gave special praise to Pierre Arsenault, the athletic director, and Marcel Dupuis, the athletics manager, saying, “They were extraordinary. The smoothness by which everything ran reflects directly on them and their commitment to the tournament.”

Erin Steeves said that hosting nationals as a senior was “an incredible experience. It is both a rewarding and bittersweet feeling to have been able to be a part of a program that has grown so much over the past four years.”

The tournament saw athletes from across the country, with teams from Ontario, Quebec, Alberta, British Columbia and Nova Scotia. All eight teams battled hard, but the Humber College Hawks came out on top, defeating the Dawson College Blues in the finals.

The tournament concluded Saturday evening with an awards ceremony where Mangold was one of five players in the tournament to earn Second Team All-Star. Mangold adds this to her impressive list of awards. She is a two-time CCAA All-Canadian, an Academic All-Canadian and a National Scholar. Mangold was also named player of the year at the ACAA Basketball Championships in March.

Mounties Erin Steeves and Sarah McGeachy will graduate this year, both ending successful four-year careers with the team. With most of their line-up returning next year, the Mounties hope to take another run at the national championships, to be hosted by Cégep de Sainte-Foy in historic Quebec City.