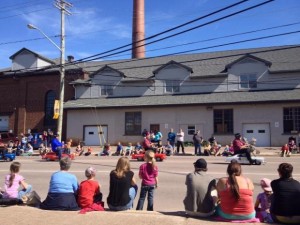 For some it was familiar, for others it was a brand new experience. But for most people who went to Sackville’s thirteenth annual Fall Fair, it was a time to embrace one’s inner—and very excited—child. With over thirty events spanning the course of four days, from September 19 to September 22, there was something for everyone.

The Opening Ceremonies for the fair were held on Friday, September 20 at the Bridge Street tent; this year, the theme for the fair was “Time Marches On!”, and many of the events seemed to have been designed with that maxim in mind: the Sackville: Then and Now book launch and exhibit, 200 Years of the History of Fashions Show and the 250th Anniversary Celebration of Canada’s First Baptist Church, to name a few.

A kick-off for the excitement to come, award presentations and live music led up to fireworks, held at Marshview Middle School at 9:00 pm. The fireworks could be seen from just about anywhere in Sackville: some chose to watch from the football field; others sat on roofs three streets over; still others got as close as possible, seeking the maximum ear-popping experience. Regardless of where you watched them from, the fireworks awed humans and scared dogs all over town.

Saturday, people travelled down to Doncaster Farm for the Bud Doncaster Memorial Agricultural Field Day. While the sights and the smells were enough to attract just about anybody, there was also a corn maze that people were invited to get lost in, whether for two minutes or for twenty.

The maze was designed by Derrick Acton, who had been preparing the layout since early spring. There was also a mountain of hay bales for climbing, cows to be milked, pies to be eaten, antique tractors to be admired, and music to listen to. It was a lively gathering, and Sackville showed just how cute and folksy they can be.

“I like the fair because it brings the community together,” said thirteen-year-old Zoe Estabrooks, whose chocolate chip cookies won third place in the cookie category of the baked goods competition. “I used my dad’s recipe!”

Across the street, at the corner of King and Main, Hinchey’s Rides and Amusements was also open for business. With rides such as the Tilt-a-Whirl, the Wipeout, and a giant slide, all the attractions offered fun, screams and just a touch of nausea. It was a combination sure to appeal to child and university student alike. There were games and prizes to be won, which, when added to the bright lights, created an atmosphere of excitement.

The corner was also the starting point for the Fall Fair Parade, which featured decked out cars, candy throwing townspeople, some kids who were nearly run over by floats in pursuit of said candy, Shriners on miniature cars, and a surprisingly large number of fire trucks. The festive atmosphere was strong as people lined all the way up Main Street, enjoying the sights and the sun.

On the final day of the Fall Fair, the event to see was the Anything that Floats Race at Silver Lake.

Five teams participated in the Sunday race, each with a medley of boats of constructed out of such things as empty water jugs, orange tarps, rubber boots and even a satellite dish.

While awards were given out for Best Use of Fall Fair Theme (won by team ALPHIN) and for Most Creative Design (won by Ants Go Marching-Boating 2×2), the coveted Fastest Vessel Prize went to Andrew and Jeff Ollerhead whose raft, the H20 So Fast, finished the race in at two minutes forty-four seconds.

“The water was good; not too cold,” said Jeff Ollerhead, “and we didn’t sink!”

With so many activities, there was something for everyone at the Fall Fair. “It was fun,” said third- year student Gwynneth Coggeshall “The best part was going on the rides with my friends.” And, while it only lasted a short while, the sense of community it fostered will doubtless carry over until next year’s celebrations.