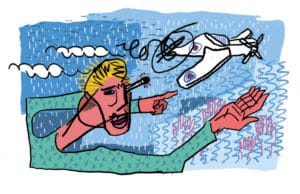 Chapter 1: A Curious Night in Lincolnshire

Ralph looked skyward with a start. The distinct reverberation of a sonic boom had snapped him from a daydream, and now he scanned the clouded horizon for its source. If the sound is over there, where is the plane? Above me? He chided himself for not having paid more attention in grade 10 science. That was quickly forgotten though, as he caught sight of a military plane on his left, curling down towards Lincolnshire. What in tarnation is this about? Ralph loved to use words like tarnation.

His first instinct was self-preservation. With surprising speed, he grabbed the lid from a garbage can at the front of his driveway and ran back onto his porch. He squatted there, leaning against the brick wall of his home, using the garbage can lid to shield his face and vital organs. He was thankful nobody saw him. A helluva day to be locked out. Christ. And by George, where’s Dad?

After some reflection, Ralph decided he was being ridiculous, and cowardly. His second (but, he thought, his more authentic) instinct was to get as close to the airplane as possible. He carefully set down the garbage can lid, as if the clattering noise might give away his position, and booked it across the street to the park. He made a beeline for Old Piney, the park’s largest tree. It sat on a small hill – more of a bump, really – near the centre of the park. The town had cleared a wide ring of trees around Old Piney, for aesthetic effect. Ralph thought it a very effective choice.

He had climbed Old Piney a thousand times before and could easily have done it eyes closed. He often did, in fact. This time, however, he gave himself the advantage of sight, and practically flew up the tree. Once positioned in his usual hold, about 10 feet from the top and 50 from the ground, he turned his attention to the plane. It was a small jet, one of those dogfighters the armies don’t really use anymore. It flew in circles around the town, intermittently swooping  towards the ground. Some kinda arsehole. There was a rope hanging off the back of the plane, with an object attached at the end. This last detail perplexed Ralph.

It soon became apparent that the plane was descending. With each swoop it came a little closer, its deafening roar becoming louder. Although Ralph could hardly believe it, it seemed to swoop directly at him each time. What in God’s name is the meaning of this? The initial fear for his safety was creeping back. Just as he’d decided to get back to his garbage can lid, the plane made its deepest swoop yet. It flew right over Ralph, some 30 feet above Old Piney. As it flew over him, the rope and object fell from the plane. There was a shattering of branches, and chips of wood flew in every direction.

Unscathed, Ralph opened his eyes to find a brown sack, about the size of his own body, directly in front of him. It looked kind of like a medieval peasant’s smock. A zipper ran down the centre of the bag, from top to bottom. Ralph reached out his right hand. He paused, then reached out with his left hand instead. The devil’s hand befits this queer happening. As his fingers clasped the zipper, he felt a shiver run through his arm and descend his spine. Godspeed. He ripped down the zipper to reveal a pale and naked body with a tree branch protruding from its midriff.

Only seconds had passed, but a crowd already gathered at the base of Old Piney. “Ralph! Ralph!” a young father called. “What is it?”