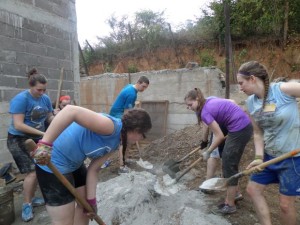 On a cold Sackville morning, the Friday before reading week, Mount Allison students left their homes for a chance to help others and themselves.

Mt A’s chapters of Global Brigades and Habitat for Humanity—two philanthropic organizations—sent over 140 students down south between them. Habitat for Humanity bussed to Punta Gorda, Florida, while Global Brigades flew to Honduras, a developing country in Central America. Both organizations have garnered significant support from Mt. A’s administration, which has promoted the service trips online and in university publications.

Ron Byrne, Mt. A’s vice-president, student and international affairs, said that these service trips provide educational an experience—exposing students to things they would otherwise only read about.

“I’m a passionate believer in these,” Byrne said. “I think the learning is critical. In many, many cases, I think students will be able to apply things that their learning in the classroom to things that are happening in the real world.”

While Mt. A has praised what it calls “student philanthropy” as a cornerstone of the university community, some of its service trips have received criticism for their simplistic and periodic approaches.

Dave Thomas, a political science professor at Mt. A, said that he is “deeply skeptical” of the value in week-long service trips.

“There seems to be mounting evidence that the short-term volunteer activities often don’t lead to the long-term effects and benefits that we want them to.”

According to its website, Global Brigades’ mission is “to empower volunteers and under-resourced communities to resolve global health and economic disparities and inspire all involved to collaboratively work towards an equal world.”

“I felt like what I want to be involved with is not something that helps me more than it helps them,” St Louis said. “I felt that Global Brigades—while undoubtedly does help them in some ways—focuses in large part on what it does for the person who goes down to Honduras.”

Critics of these trips have accused them of ‘voluntourism,’ a form of tourism in which travellers participate in volunteer work.

“You can’t stop examining the ethics of what you’re doing,” de Ste-Croix said. “You always need to be questioning, but across-the-board statements and criticisms that sweep away what’s been done as voluntourism, they’re as unhelpful as the evangelical mission groups who also think they know everything.”

“I think no matter what, you can criticize volunteerism or personal interest philanthropy, and those people will just feel that way, and that’s too bad,” said Kristopher Russell-Murray, Mt. A’s Habitat for Humanity chapter vice-president of finance.

Mt. A’s Habitat for Humanity executives did not deny that there is not an element of voluntourism involved with their trip. They said it is not a negative phenomenon.

“I think that whenever you travel you’re bound to see some sights, but I think that the main focus of the trip wasn’t being a tourist; it was to volunteer and, if we could volunteer twenty-four-seven that we were there, I think we would have,” said Maria Wilson, Mt. A’s Habitat for Humanity chapter president. “But, unfortunately, Habitat for Humanity only has certain hours that you can volunteer.”

Charlotte County, the location where the builds took place, was the  victim of a level four hurricane, Hurricane Charley, back in August 2004. According to FEMA report, nearly eighty per cent of its buildings were impacted. Today, nearly twelve per cent of the population lives below the poverty line and areas are still recovering.

Over three days, members worked the same hours as the contractors, from 9 am to 3 pm, were spent on site, working to put up vinyl siding, painting, and roofing. The students participated in everything that didn’t require specialized training, like plumbing or electrical.

It wasn’t all work, though. Due to set work hours in Florida, Habitat for Humanity members had some downtime. After builds, the group had some time to visit beaches, malls and go bowling. On their last day, they went to a dinner at Fisherman’s Village. The event was not strictly sober. Those who were of age had the freedom to go out, but the exec made sure to remind them why they were there.

“If people are of age and want to drink at night, we gave them that freedom,” Wilson said, “but, at the same time, we want to make sure that everyone is on their A-game at the work site, so nobody is going out to get silly; the one reason we were down there was to volunteer, if you choose to drink, feel free, but we made it clear what the purpose of the trip was.”

According to its website, Habitat for Humanity “believes that every man, woman and child should have a decent, safe and affordable place to live.” The organization builds and repairs houses around world using volunteer labor and donations.

Both Global Brigades and Habitat for Humanity rely on a cumulative system of service trips. This allows groups to visit one week at a time, building on the last group’s effort.

One criticism of these trips questions who benefits from the efforts of the students.

“I think the primary beneficiaries are people who come from here,” Thomas said “It’s a great experience for them; they learn a lot; it looks good on their CVs.”

Executive members of Global Brigades agreed that they often benefit more than those whom they intend to help.

“It is a two-way street,” said Alex Whynot, Mt. A’s Global Brigades chapter president. “We are looking to do work that benefits the community, obviously; however, what each individual student takes from it is greater than what each community immediately takes from it,” Whynot said.

Global Brigades Mt. A sent five brigades to Honduras this year: water, medical dental, architecture, public health, and micro-finance. Their goal was to work with local Hondurans to benefit the community in these fields.

While Thomas is skeptical of these service trips, he said students should be cognizant of their actions.

“Most of the students that I have talked to are honest and open about what’s happening,” Thomas said. “That’s better than if people blindly go into these things thinking they are saving the world, when they’re really not.”

“I think that a lot of students’ minds can be opened up by engaging in these kinds of activities—throwing themselves into a completely different context than they have ever seen before,” Thomas said.

Whynot agreed. “It’s something that you can’t be shy of,” Whynot said. “We’re not changing the world; we’re hoping to change lives in Honduras and in Canada.”

The executive members of the Habitat for Humanity said that engaging with the culture contributed to the overall volunteer experience.

“I think it’s great that people can volunteer and see other things too while they’re there, because it helps us build character and it’s a cultural experience, and that’s all part of it, too,” said Lauren Gauthier, Habitat’s vice-president of fundraising.

Some have criticized the organizations for sending students to different cultures and contexts with little understanding of the political and social climate.

A large component of this potential cultural gap is language. Maritza Fariña, a Spanish professor and Global Brigades chaperone, said that many students in Global Brigades do not try to learn Spanish—the national language in Honduras. She said that the only way to fully understand the Honduran people was to learn the language.

“The first time its okay, but if you go for the second and third time, you ought to learn the language,” Fariña said. “I think that shows respect.”

Whynot, who worked in the water brigade this year, said that while his Spanish is limited, he was able to communicate ideas to the Honduran community.

“Although there is a language barrier, the communication barrier can sometimes be broken down,” Whynot said.

“In Honduras, just like in any other place, there are social and political contexts and conflicts,” Thomas said. “And any time you involve yourself in another community, you are stepping into typically very complex social relations in that location.”

In 2009, Honduras underwent a constitutional crisis that resulted in a coup d’état. Its de facto government has been condemned as illegitimate by multiple countries and the United Nations. On top of that, the presence of North American companies invested in Honduran water and minerals have caused environmental damage and economic dependencies.

Thomas said that inserting one’s self into another culture could have unknown ramifications. Executive and first-year members of Global Brigades said they questioned the impact they had on the Honduran communities they visited.

These short-term trips, while claiming to promote sustainable development, have been called charities by critics. Thomas said that he contrasts the charitable approaches to poverty and inequality with social justice.

Fariña declined to travel to Honduras when first approached by her students six years ago.

“I said no, because I don’t believe in charity,” Fariña said.

Thomas said the social justice approach “asks questions about our own complicity in creating the circumstances for people to be poor in the first-place.”

Thomas said that students should consider the political situation in Honduras before inserting themselves in the lives of its citizens.

“There are plenty of things you can do right here that have an impact in other parts of the world,” Thomas said.

Such criticism has encouraged executive members of philanthropic groups to examine their motives and actions. Whynot said that he encouraged his executive and chapter members to be skeptical about their mission and to think critically of their work.

“There are always goods and bads, and to recognize them is the first step.”