The economics of Sackville’s Saturday mornings 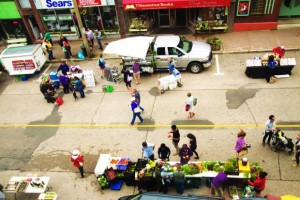 Every Saturday morning from May to October, pedestrians forego the sidewalks of one of downtown’s busiest blocks to stock up on local groceries and crafts, grab a bite from a specialty food vendor, and catch up with friends. This is the Sackville farmers’ market.

A recent study conducted by Norma Jean Worden-Rogers attempts to measure the market’s impact on Sackville’s economy. Worden-Rogers, who graduated in May from Mount Allison University with a degree in environmental science, has sold community garden produce at the market for the past three years. This summer, she conducted research on the market over three weeks through verbal and written surveys.

“I think it puts numbers to all of the things we see on a regular Saturday,” she said.

The study suggests that around 59 percent of market-goers spend between $11 and $40 each week. That amounts to average weekly gross spending of $11,073 during the peak season between July and August. By drawing crowds downtown, the market may also support nearby permanent businesses, helping to bring in $7,326 of revenue for these on Saturdays over those two months.

Farmers’ markets across Canada have similar numbers. According to a 2008 study by Farmers’ Markets Canada, customers at a comparable markets spend an average of $36 per visit. The same study indicated the impact of farmers’ markets on the Canadian economy was $3.1 billion.

The Sackville farmers’ market is growing. About half of the vendors included in Worden-Rogers’ study have only set up at the market in the past two years. Ruth Coates, a vendor for Nature’s Route Farm, said that she has noticed a significant change in the market’s size and reception in recent years.

“For the first few years I felt like I knew everyone who came to the market, and now I feel like I don’t know a fraction of them,” she said.

“If something is vibrant and growing, people will say, ‘Oh, I want to be there,’” said Strain.

Farmers Market Canada considers any market with more than 40 vendors a “large market.” During the peak season, the Sackville market falls under this category, though it drops to a “medium market” during the winter, with around 25 vendors.

Strain said that although the study does not account for important factors such as diverted spending from businesses like the Co-op and SaveEasy, it suggests a positive impact on the town of Sackville.

“Just looking at the data, there is evidence there of a real positive impact,” Strain said, “and it’s largely in people’s time.”

“If you’re staying an hour or two, you’re not just shopping,” Strain said. “This is a community meeting place.”

Perhaps even more significant than the economic impact of the farmers’ market on Sackville is its cultural benefits.

According to the study, market-goers attend to support local businesses, buy quality food, and congregate with friends and colleagues. All products sold at the market must be produced within 150 km of the town.

“They like the sense of community,” Worden-Rogers said. “In a way, the market is almost like a new church.”

Pauline Richard, a vendor for Les Jardins Anicha, started vending at the market in April. While she said she did not yet feel a part of the market community, she could sense its presence.

Graham May, a fourth-year international relations and environmental studies double major, said that the relationships he forms at the market are unique and important to him.

“To be able to connect directly with the farmers and producers of my food is pretty special,” May said. “Buying local food is not usually a money-saving practice; often we’re paying more for what we’d get in a grocery store, but there are other intangibles that we like.”

When asked what they valued most about the farmers market, many customers said the family-friendly environment. Jessi Fogan, the second-longest participating vendor at the Sackville farmers’ market, sells greeting cards in the Bridge Street Café. She said she often looks after children as their parents shop.

“It’s the quintessential small-town friendly experience,” she said. “There is not anything remotely like it in the area.”

Although most customers and vendors said they thought the market was a good use of public space, the province has pressured Sackville to change its location because Bridge Street forms part of a provincial highway. This Saturday, Sept. 20, the Sackville farmers’ market will be set up at the Bill Johnstone Memorial Park for a one-week trial.

Fogan said she likes the outdoor aspect of the market, and that while she is a little nervous about the move to the park, she remains optimistic.

“I certainly think it’s worth giving it a shot,” she said.

But others are more concerned with the change. Worden-Rogers said that the move would pose several problems for vendors, including lack of vehicle access and limited indoor space. Another option is to move the market to the indoor Civic Centre on Main Street, a fifteen minute walk from downtown.

“It would be really detrimental to this downtown sector if it moved up there,” Worden-Rogers said.

The economic and cultural impacts of a change in location are unclear, but if regular customers continue to support the market, its future seems secure. Three weeks ago, the Sackville exit sign on the Trans-Canada Highway was changed from Thaddeus Holownia’s iconic hay bale photo to one of the farmers’ market.

“It makes Sackville a more attractive place for people to live and spend their money in other regards,” May said. “It’s certainly more than what’s just bought and sold here; it’s also how it makes people feel about their home.”