Town and TBS team up to bring the blues to Sackville 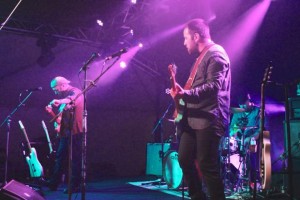 One of the best outdoor venues to play in Sackville is right in the heart of the town on Bridge Street. The Ottawa-based band, Monkey Junk, took to the stage around 9 pm on Saturday night. The weekend was full of musical acts on the Bridge Street stage, but the band, brought to the stage by both the Tantramar Blues Society and the Town of Sackville, would be the ones to close out the Sackville Fall Fair in 2013.

Monkey Junk features two guitarists and a drummer. Steve Mariner is the front man for the band, playing harmonica, rhythm guitar, and serving as the main vocal contributor for the band. “Tony D,” the name he goes by on stage, is the lead guitarist, while Matt Sobb plays drums.

The trio play a self-proclaimed “unique blend of swamp roots rock.” It sounded like the three could substitute for extras on the television series “Duck Dynasty,” though instead of showing up looking like Billy Gibbons from the band ZZ Top, the three were all clean-cut and ready to rock Bridge Street.

The band itself definitely took influence from the Black Keys. They brought a very similar style of raw, yet modern, blues to the stage. Monkey Junk, whose line-up of musicians is similar to the Black Keys, could easily pass for a modern rock band. Their instrumentation, which incorporates auxiliary percussion (shakers) with a combination of the harmonica from Mariner, keeps them grounded as a blues band.

Their song, “I Wanna Put a Tiger in Your Tank,” vaulted the band to success in 2009. The song was the single off of the band’s 2009 album Tiger in your Tank. Its backbone is a basic blues riff from lead guitarist Tony D, while a harmonica solo from Mariner lent the song a B.B. King feeling. Another notable part of the night was the band’s performance of the song “Pay the Cost” from their 2009 album. This song utilizes the basic blues progression, and a slow beat allows for long drawn out solos. Mariner used the free-form section of the song to launch a great harmonica solo, and Tony D established tonality with his baritone guitar. Finally, Sobb took his turn soloing when he turned his kit into a punching bag for a full minute. The band really seemed to enjoy the intimate atmosphere that the Bridge Street tent provided. A couple hundred people showed up to listen to the concert. Drummer Sobb played to the rear of the stage, and Tony D and Mariner fed off of each other’s energy to produce a full sound from the three-piece band.

The band has a new album coming out on September 24. All Frequencies will be the third studio album for the Canadian band. They have already released a single, “You Make a Mess,” from the album. Blues Rock Review had this to say about the song: “[the song] has the upbeat vigour that puts the boogie back into the blues. The hooky chorus and rip-roaring rhythm puts this track in the album’s limelight.”

The band had a great showing in Sackville on Saturday, and now plans to head home to Ottawa to release their new album.