A conversation with a member of MAFA’s executive 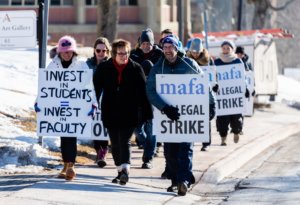 As of Monday, Feb. 3, the Mount Allison Faculty Association (MAFA) is on strike. The Argosy spoke with MAFA executive Toni Roberts who discussed the strike from the point of view of the union.

Roberts, MAFA’s collective bargaining officer, described feeling that negotiations had not been productive in the past few weeks. “We’ve had several rounds where things haven’t gone well. From the [administration’s] hiring of lawyers who are known to be union-busting lawyers to … really not negotiating out of good faith,” he said.

According to the MAFA website, one of the key issues under negotiation is job security and salary for precarious workers. Roberts said that part-time positions are not fairly compensated. A part-time stipend is about $7,000 per course. Under the most recent collective agreement, part-time faculty are only allowed to teach one or two courses a semester.

“The reality is, people are making $14,000, maybe $20,000. That’s the reality, which is actually under the poverty line,” said Roberts. “Increasingly, we are employing people under these stipendiary contracts and that’s a problem [because] they’re not well protected.” According to Statistics Canada in 2015, the market basket measure (standard of living) threshold for a single person in New Brunswick is about $19,500. It is higher for couples and parents.

Another issue revolves around faculty rights regarding sick leaves. “We’re trying to make sure that people who are sick don’t have to then further combat bureaucracy or combat arbitrary decisions that are made by the administration about whether they’re paid or not paid,” said Roberts.

A third issue is disability accommodation for faculty. “We talk a lot about accommodation for students and we’re more than happy to accommodate students for a number of reasons. We’re basically asking for the same kind of thing,” said Roberts. “That could be a change in teaching responsibilities, a change in committee responsibilities… It could just be a shift in that setup. It could be a reduction temporarily in teaching until someone can integrate back fully. That’s all we’re asking for.”

The final issue Roberts mentioned was the replacement of faculty during time off, such as sick leave, parental leave or sabbatical: “The replacement of their courses was down to about 30 per cent a few years ago, which means that students don’t have courses they need to take for programs they’re in or to complete degrees,” said Roberts.

Roberts also spoke about how the relationship between faculty and administration has deteriorated in recent years. “[When President Boudreau was hired, he] was very aware of the fact that there were and are tensions between the administration and faculty and [that] we need to work on those things…. And unfortunately, they are deteriorating and that’s really disturbing,” Roberts said.

Roberts spoke about how the strike revolves around differences in morals on the two sides. “Some of these issues are not really about money. [Administration] wanting to maintain control and power really is about, in some instances, dehumanizing people, and for people who are sick or disabled, really pulling back their rights. And that’s really disturbing,” he said. “We don’t want to run post-secondary institutions like businesses. That is a huge mistake in terms of how it can shut down creativity, how it can shut down critical thinking, how it can shut down expansive ways of knowing … and that to me is a real loss if we continue down this road.”