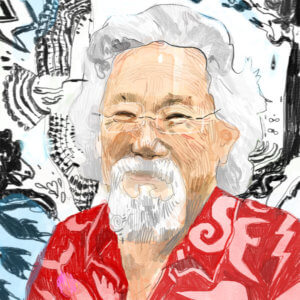 David Suzuki spoke to a crowd of students and community members who filled the library in support of local Green party candidate Megan Mitton on Friday evening.

Suzuki began by explaining that he supports the Green party of Canada because he believes they are the only party that adequately focuses on the environment. “The NDP, the Liberals, the Conservatives: I don’t see anything changing in terms of their fundamental worldview,” said Suzuki.

He noted the contributions of Green party politicians to Canadian politics. “We act as if environmentalism or the Green party is somehow a little special interest group, as if somehow they don’t contribute in a central way to the way that we are living,” said Suzuki. “I have now seen the impact of just one Green member of parliament, Elizabeth May, in Ottawa. When our government is buying these pipelines on behalf of Canadians, when our government signs treaties in Paris in 2015 and then expands the tar sands, builds more shipping opportunities for bitumen … without Elizabeth there, who is going to raise these issues?”

Suzuki made three points that are relevant to the world’s current environmental situation. First, he told a story about how the nitrogen-15 in British Columbia’s salmon travel through the digestive systems of several animals up the food chain to eventually help trees in the boreal forest grow. This story was an example of how interconnected systems are in nature. He said that the current government looks at fragments of problems, which is not effective: “We subdivide up and absolutely ensure we will never be able to manage anything within that system. It’s all connected. And that gives us a real responsibility because everything we do is going to have consequences.”

Next, Suzuki told the story of how he once tried to connect with a CEO involved in the tar sands project he was fighting in Alberta. Suzuki asked the man what all animals, including humans, need first and foremost. He watched the man struggle not to say “a strong economy.” Suzuki eventually answered his own question: Above all, humans need clean water, clean air and food. Placing those needs below the economy or the success of industry is illogical, he said.

“Every scientist I have talked to has said we are way over the carrying capacity of the biosphere. And we are maintaining the illusion that everything is alright by using up what children have every right to expect,” said Suzuki. “We’re using up now all in the name of economic progress.”

Suzuki spoke on the importance of elders in this concept, saying, “Talk to any elder in this room and ask any elder what the air and water and biodiversity was like here 50 or 60 years ago. All over the world, our elders are a living record that we’re using up the rightful legacy of the coming generation.”

The third point Suzuki made was about the place of national pride in environmentalism, and how he was unhappy with Canada’s treatment of environmental issues. Suzuki said that Canada is not upholding its promises to the Paris Agreement signed in 2015. For example, the average temperature is on track to rise three to five degrees in the next century, as opposed to the agreed upon target of two degrees. Suzuki believes the Canadian government is not doing enough to prevent this.

“We as Canadians believe that we are a country that makes international agreements and we stand behind them,” said Suzuki. “That’s what my Canada is. It’s time now for young people to stand up and say, ‘It’s my future. You guys have left us a legacy that you think is progress and great stuff. But it’s not when, you’ve used up the kind of world that we should have inherited from you.’ ”

Megan Mitton also spoke at the event, specifically addressing the students in the audience. “I don’t think young voters are apathetic,” she said. “How could I when I see how passionate young people at Mount Allison are, getting involved in causes that they believe in and working hard for them? This is the type of people that I see in this room: people that really do care.”

Jo-Ann Roberts, deputy leader of the Green party of Canada, gave a closing speech. Roberts spoke about the common perception that voting Green is a wasted vote and encouraged young voters to rethink this idea. “That is what green leadership looks like, and speaks like. It speaks the truth without fear,” she said. “If you don’t vote Green, you don’t get Green MLAs. Brave people are willing to vote for what they believe in.”

Suzuki also encouraged students to vote Green. “Think about what’s going on and realize that the future now is at stake. We can’t continue with the same old, same old,” he said. “You need to tell people, ‘It’s my future you guys are diddling with because you’re not working the right way,’ and the Greens allow you to express that alternative.”