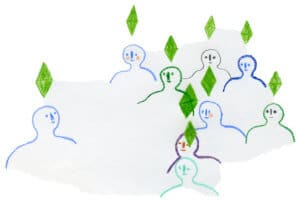 A mix of faculty, staff and students came together to discuss faculty mental health at the first Quo Vadimus of the year. The event on Oct. 4 created a space where people could share their thoughts on an issue pertinent to the Mount Allison community.

The event was run by university librarian Marc Truitt and led by dean of arts Elizabeth Wells. The session covered the different stressors faculty members face, the issues with competitiveness in university culture, and what can be done as a university community to improve the work-life balance for both faculty and students.

“We need to think about what our life needs to be,” said Dr. Juan Carlos Martínez, professor of Spanish and department head of modern languages and literatures, during the discussion. “When I talk to a lot of my colleagues in general a lot of them only talk about research and for me it’s like they [only] exist if we know they are doing research. They exist if we know they have a PhD. They exist if they know that they are somebody. And what about life? What about, ‘My job is not my life and it’s never going to be?’ My life is completely different from my job.”

At one point the topic turned to the competitive atmosphere of academia and the pressure this can create for faculty, along with staff and students. “I see the competition and I think it’s a huge problem with our students, that we teach them they need to compete,” said Martínez. “As students they don’t share because they need to keep their scholarships and this is what our society is teaching, what university is teaching: We need to compete, we need to be successful. What that means is to go from A to C, but when we arrive at C what is the meaning? And that I think is the big problem that we have.”

Martínez suggested that the answer is a change in society as a whole. “A group of Indigenous people in Bolivia said the problem is that our society is a pie and we want a piece of pie but … the pie is rotten,” he said. “We need to change society and ask, ‘Competing for what?’ I think that this is the problem we are encountering with our colleague group. They’re competing with themselves: competing, for example, to be a dean, competing to be a vice president, because that is a status. Every time we do that we are going to be hard on ourselves, [and] we are going to have problems with ourselves.”

One of the readings, a report titled Promoting Supportive Academic Environments for Faculty with Mental Illnesses by Margaret Price, said, “Faculty with mental disabilities are a vital, creative part of the academic workforce. Although there is still much stigma and misunderstanding attached to mental disability, colleges and universities are increasingly recognizing that campus mental health affects all members of the campus community, and that honoring all faculty members’ needs, as well as their strengths, leads to a campus climate that is both healthier and more just.”

Quo Vadimus began as a way for people to discuss issues taking place within the Mt. A community in a safe, respectful space. “It’s just something that happened. I guess you could say that it traces its roots to the 2014 strike or the aftermath of the strike really, when Eileen Herteis and I had a feeling that people weren’t talking and that they needed to talk, that they needed to be able to talk in a collegial and respectful way about all sorts of things relating to the strike that resonated here at Mount Allison,” said Truitt.

“Essentially it’s just a series of sessions that have conveners, where we get together and invite the Mount Allison community and Sackville community if anyone wants to come and talk about whatever the convener wants to talk about,” Truitt continued. “It has a bit of a structure: We meet the first Thursday of the month in October, November, December, February and March.”

There are five sessions every year. Truitt emails a mailing list calling for conveners and whoever wants to convene a session presents him with a topic, an abstract and a few brief readings.

“I thought that [faculty mental health] would be interesting to think about. When we’re putting a lot of effort into student mental health, and rightfully so, we should also think about faculty,” said Wells, on why she chose this topic for the session.

“Stressors continue into faculty life. It’s very isolating for one thing: There’s pressure to perform both in front of the classroom and also in terms of research and service. There’s not as much support amongst faculty as we’d like to think in universities with competitions for grants and for different kinds of things,” Wells said.

On the attendance of Quo Vadimus, Truitt said, “Students have been kind of an iffy-er thing, and I mean that in the sense that sometimes we get none of them and then occasionally we have half the people there are students, and frankly it really rocks when the students are there. So it’s a good thing that the next session will be convened by a student.”

Sam Fisher, the student convening the next Quo Vadimus, will be discussing the rise of populism on Canadian university campuses. “I sort of developed this question of ‘Is there a rise of traditionalist conservatism amongst younger people?’ ” Fisher said.

Anyone is welcome to come discuss this topic, the materials for which can be found on Moodle, on the first Thursday of November.