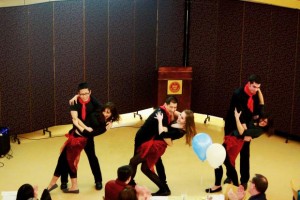 MOSAIC is run by an eight-person executive including international and Canadian students. According to the group’s Facebook page they aim to “[bridge] the gap between students from different cultures and [promote] multiculturalism at Mount Allison University.” MOSAIC has hosted the banquet every year since its formation four years ago.

The menu is drawn up by MOSAIC and passed on to staff workers at Jennings, who give the executive a price. Planning continues until the night of the banquet when student volunteers arrive at Jennings to cook. “[T]hey will have all the ingredients that we ordered ready,” Yoo said. Although often students do most of the work, this year Yoo said meal hall staff “took care of eighty to ninety per cent of preparation.”

In addition, two students were given the Class of ‘33 Award. The award is presented to two returning international students who have “enriched the university community through participation and leadership in campus life, and promotion of cultural diversity and understanding.” Mt. A Vice-President International and Student Affairs Ron Byrne presented the award to Rayan Bouhlel from Tunisia and Patricia Lawrenz from the United States.

The event also featured multiculturalism-related trivia questions and a video prepared by MOSAIC in which a number of students explained what multiculturalism meant to them.

Manaal Farooqi, MOSAIC secretary, said that the event demonstrated that “food is a great catalyst for great discussion.” Farooqi was also one of two MCs for the evening, along with Angad Singh Dhillon.

Farooqi said a number of sponsors helped MOSAIC cover the cost of the event, including the Campbell-Verduyn Family, Ron and Anne Byrne, Adam Christie, Sassy’s, Jack’s Pizza and the Mount Allison Students’ Union.

The event appealed to a wide range of people, with attendees of diverse ages and backgrounds. The event may have been particularly attractive to local families, as MOSAIC offered free tickets to children under five.

Farooqi and Yoo said that they do not specifically target members of the wider Sackville community. “It happens naturally,” Farooqi said.