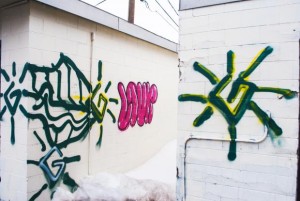 At a recent public meeting at the Sackville Town Hall Sergeant James Graves informed the community that the RCMP is cracking down on Sackville graffiti. Many local residents who attended the public discussion also expressed frustration at a perceived increase in graffiti.

Local officers presented a review of their activity over the past year and discussed their plans for 2014 at the Feb. 17 public discussion. Graves closed the meeting with a call to action on graffiti. He said that although the graffiti is not noticeable to most, if left alone, “all of a sudden it gets to the point where it starts to add up.”

At the meeting Graves also pointed out that too much graffiti would make the town less attractive to prospective businesses. Graves said that the ‘taggers’ affect the business community more than most, and added that graffiti could “affect the commerce of tomorrow.” The most troubling issues for him was that “we could see there are [some] that are sexual in nature” and that “they defaced the Legion.”

A Feb. 12 RCMP press release announced that a team of Sackville officers, along with Codiac Regional RCMP Graffiti Investigator Constable Chris Fader and the New Brunswick RCMP’s Forensic Identification Section are “investigating a series of graffiti incidents that occurred in the Lorne Street area.”

Despite having only nine complaints filed since the beginning of February, Graves said Fader’s examination identified around “eighty-some odd tags” that were “concentrated in the downtown core.” The examination also revealed that there were two other ‘taggers’ active in town.

In a Feb. 19 issue of the Sackville Tribune-Post, Graves said, “we are not pushing the panic button yet.” During the public meeting Graves also said, “the funny thing about Sackville is, if they ask for a wall or a mural we would probably give it to them.”

A group of concerned citizens have formed a Downtown Graffiti Clean-up Committee. The group was formed “to clean up buildings (primarily in the downtown core) which have had graffiti painted on them,” explained committee co-chair Gwen Zwicker in email correspondence with The Argosy.

Zwicker said the committee included a variety of groups and individuals such as the Greater Sackville Chamber of Commerce, Mainstreet Redevelopment Inc., the police, Leadership Mt. A, the Mount Allison Students’ Union, and some local business owners.

“While many see graffiti as an art form, in this case it has been painted on private property, which is vandalism,” read Zwicker’s email.

Zwicker stated that the group is enlisting volunteers to help remove graffiti from downtown property.

“We would like the community to be an attractive and vital place for everyone. To that end, we are offering to clean buildings for those affected,” she explained.

Zwicker echoed Graves’s concerns about the potential impact on local business, and said the group was hoping to find a location where artists could paint without damaging private property.

“We recognize that Sackville is a town of many artists and we do not wish to discourage that. We would like this kind of art displayed appropriately—not on private property,” she concluded.