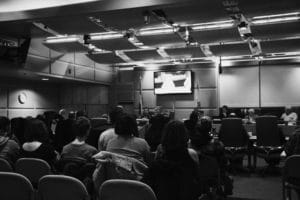 Sackville Town Council passed a motion with a vote of 5-3 in official opposition to the Energy East Pipeline on Feb. 14, following a four-month-long campaign led by student climate justice group Sackville No Energy East (S.N.O.E.).

According to S.N.O.E. member Claire Neufeld, the approval of the motion at town council “demonstrates the town’s environmental leadership and an investment in our collective future.”

At a previous town council meeting on Feb. 6, TransCanada sent representatives Patrick Lacroix, New Brunswick lead of community and Aboriginal relations, and Steve Morck, senior environmental advisor for the Energy East Pipeline, to give a presentation in favour of the pipeline.

Approximately 30 New Brunswick trade union members, who were from “all around,” according to Lacroix, also attended the meeting on Feb. 6.

S.N.O.E. is a student climate justice group that began in a geography seminar on environmental issues last semester. The group presented to MASU council and Sackville Town Council, asking both bodies for symbolic statements of opposition to Energy East in November. MASU has not yet voted on the matter.

S.N.O.E. also sent out a petition to the Mount Allison community that gained over 700 signatures. They plan to continue their lobbying efforts to receive similar statements of opposition from  Mt. A and the MASU.

The pipeline, set to run over 4,500 km from Alberta to Saint John, N.B., would carry an estimated 1.1 million barrels of crude oil per day. This would make it the largest oil pipeline in North America, with 415 km of new pipeline to be laid in New Brunswick.

When the pipeline leaks, which is widely regarded as inevitable, it will only be shut down if one per cent of the oil it is carrying is leaked. If it is shut down, it takes a minimum of 10 minutes to cut off the flow. In that time, a minimum of 3 million litres of oil will already have spilled.

Brad Walters, professor of the seminar on environmental issues, attended the council meeting. He said that passing this motion was a step in the right direction. “It’s very encouraging to see more and more people engaging in these issues in a political way. People in positions of power, in government and industry, are not doing nearly enough.”

Councillor Bill Evans presented and drafted the motion. “Global climate change affects all of us. This [motion] is completely consistent with our sustainability plans,” Evans said. Evans added that no motion passed by Town Council has had the universal support of all Sackville residents, but that this particular motion is necessary in lobbying higher levels of government to take action.

Mayor John Higham, who resigned as chair of the meeting momentarily to voice his opposition to the motion, said, “the complexity of this project deserves a full hearing of all evidence and opinions.”

Higham added that motions of this nature are not within the mandate of Town Council. He then resumed his role as chair.

With the passing of this motion, Sackville becomes the second municipality in New Brunswick, after Edmundston, to officially oppose Energy East.