Biofilm on the Bay of Fundy and Northumberland Strait 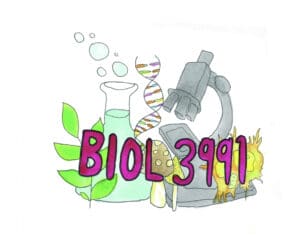 We all know that Sackville is home to the world-famous Bay of Fundy. Huge tidal cycles, Fundy National Park, and a pit stop for hundreds of thousands of migratory shorebirds are some of the major attractions you can find when visiting this amazing location. But do you know what lies at the base of this complex ecosystem? What provides the food and nutrients for all these birds and the countless invertebrates they eat to refuel?

Biofilm is responsible for keeping this special environment running! Biofilm is composed of microscopic diatoms and algae that use photosynthesis to grow and provide food for the invertebrates and shorebirds. These itty-bitty organisms live across mudflats all around the world.

Dr. Diana Hamilton, a migratory shorebird ecologist at Mt. A says, “the entire mudflat community [relies on biofilm]. It is the base of the food web, so all organisms that derive energy from mudflats need biofilm in some way.”

Although we know biofilm is important, measuring how much of it is actually in the mud can be a long and tedious process. It involves going out in the mud, collecting samples, and then at least a few days preparing and measuring what you collected back in a lab. So, to expedite this important process, alternate methods for measuring biofilm abundance are on the rise. As a third year Environmental Science student myself, learning about the value of developing a novel field method for something as integral as biofilm, sparked my drive to start an independent research project in Dr. Hamilton’s Mud Lab.

Our goal was to take reflectance measurements–that is the types and amount of light bouncing off an object–from the biofilm mud using a special tool called a spectroradiometer, and then collected small pucks of that mud from locations on the Bay of Fundy and Northumberland Strait. This plan would let us see if the quick and easy spectroradiometer measurement is comparable to the more traditional laboratory mud puck analysis. The idea rests on the fact that increasing densities of biofilm should reflect light differently, allowing for comparisons and calibrations to be made, so that we can more efficiently gauge the population health of these foundational microscopic organisms.

To imagine what the spectroradiometer looks like and how it works, think of a polaroid camera. But instead of printing a photo, it saves the reflectance value of the sample inside the instrument. Who would have known the value of a job where most of what you do is take pictures of mud?

Our goal is to use this new method to see if there is a relationship between biofilm abundance, spectroradiometer measurements, invertebrate communities, and the time at which the mudflat is exposed when tides are receding. Currently we are testing the hypothesis that biofilm will be at its peak immediately after being exposed from the tides for them to maximize their photosynthesis rates. We hope that we can detect a relationship between spectroradiometer measurements and biofilm abundance so that field sampling in the future is quicker and cleaner, while remaining accurate!

Léandra Vanbaelinghem, a recent Mt. A graduate who worked in Dr. Hamilton’s lab completed her Honour’s thesis exploring biofilm biomass and how it affected the ecology of the Bay of Fundy. She describes a ‘bottom-up’ effect that can occur, whereby the addition of fertilizer altered biofilm growth. However, there are also ‘top down’ effects that can occur from predation on biofilm by invertebrates, mud snails, and shorebirds who have been shown to feed on it directly.

Vanbaelinghem said, “I found that fertilizer increased biofilm and invertebrate community biomass, but shorebirds did not affect its biomass. As for mud snails, there appears to be a sweet spot where the density of snails increases biofilm biomass thanks to bioturbation, which increases nutrient availability.”

Biofilm “is important in a conservation context,” says Dr. Hamilton, “because it is the base of the food web. If something goes wrong with it, the whole ecological community will suffer. Understanding it gives us a window into the health of the environment.”

As I spend more time working with Dr. Hamilton and her lab, I am constantly surprised to learn more about the mysteries the mud holds. For me, this journey began with reaching out to a researcher whose work I found fascinating, and from there, my foray into becoming a skilled ‘muddologist’ has taken off. I think that being able to take part in meaningful research at Mt. A is a great experience, and I would encourage everyone to have a look around the campus and reach out for opportunities of their own. It is our experiences that shape us. And sometimes when your path is ‘as clear as mud’, that’s a good thing.