No, NATO is not Ukraine’s Biggest Problem 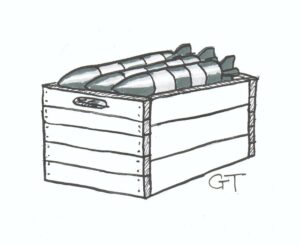 Editor’s Note: This article is a response to a piece published in a previous issue of The Argosy. I’m encouraged to see that student contributions are generating debate and I continue to urge folks to submit articles on any topics to [email protected].

Recently, The Argosy published an editorial which was equal parts irresponsibly written and poorly argued. By far one of the most pressing matters on the international agenda today, the invasion of sovereign Ukrainian territory by Russian forces is inexcusable to an extent which is difficult to overstate; thoughtless discourse abounds.

The editorial “Our participation in the war is costing Ukrainian lives” tackles two indisputably important issues: weapons leakage and press integrity. It is unfortunate, then, that both of these points are skewed and argued to such disastrous effect that the article can be understood as pro-Ukrainian life to only the most charitable of readers.

By the headline alone, the author means to convey the position that military aid from the West is resulting in Ukrainian deaths in excess of those killed by Russian forces. Simply put, fewer Ukrainian people would be dying if not for the West’s involvement. The headline deals primarily with the first half of the text, though it goes completely unsubstantiated throughout the opinion. This turn is unsurprising as the position is wholly indefensible.

“Where do these supplies end up if not on the frontlines? Weapons hoarders and the black market eagerly await the booming pipeline of weaponry,” wrote author Jamieson. This is probably an irrefutable fact and an issue in every conflict involving foreign lethal aid, or any aid for that matter. One could even concede that Ukraine scores high on corruption indices, so an inflated level of leakage could be expected.

All this does nothing to prove that most inflammatory headline, however. The fact that a great deal of weapons go unaccounted for is not necessarily incorrect, but this fact appears in isolation. No other evidence is offered up to suggest that the West’s involvement is impressing a net detriment onto the people of Ukraine. The author doesn’t even deign to consider the danger in Russia’s own arms supply line, which hasn’t become infamous so much as it has become a laughing stock.

Jamieson distills their argument later in the article, writing: “We are contributing to destabilization in a region already fragile by arming it with seemingly no second thought.” Unfortunately, it is not made clear whether these second thoughts should occur during or after the three business days before Kyiv is renamed Putingrad.

This issue does not need to be so black-and-white; we can expect our governments to support endangered nations in times of turmoil while also demanding they do so responsibly. We do not need to posture as though isolating Ukraine from lethal aid is a preferable alternative to preserving its sovereignty.

From this point, the editorial departs from ill-considered perspectives to ones more maliciously-constructed. “The Ukrainian government,” writes Jamieson on the supply line investigation, “isn’t too pleased with this line of questioning.”

Here, the author notes that the reporting done by CBS on the issue was changed at a later date, after refutation by Ukrainian officials. Jamieson, however, doesn’t use the term “corrected,” nor “retracted.” Atop legs of pure titanium, the author makes a record-shattering leap to the conclusion that the material was “manipulated” and that CBS is a pawn to the will of Ukraine.

“This should be highly alarming to anyone who supports the freedom of the press. How can it be that a foreign government can so easily manipulate and control the content of a major news network? It would be scandalous if a domestic government forced a headline and content change. Maybe it is because CBS knows their place as propagandists in their reporting of the war and realized their impotence in their role, rather than pursuing actual quality journalism.”

Not only does Jamieson make these substantial claims without citing any evidence whatsoever, the author fails to consider any number of other explanations for the changes in CBS’ reporting. Among them is the possibility that, as per the official statement, the outlet genuinely felt that the updated information better surmised the fluid situation at hand. They did, after all, admit that the information was a few months out of date.

CBS possibly did face pressure to change their story from outside the organization. Let’s not forget that these sources scrutinize a supply line to which there are two ends – the West and Ukraine. Why the author immediately assumes that any manipulation must have been done by the hand of Ukrainian officials rather than, say, American ones defending their foreign policy shortcomings, readers must decide for themselves. Of course, there is no evidence of manipulation whatsoever.

Near the article’s end, Jamieson pleads that readers be more resistant to the manufactured nature of wartime sympathies, writing: “We have been conditioned to pick a side and cheer for them in a major conflict.” This is another statement of the article’s intent: the reduction of pro-Ukrainian sympathy to mere conditioning or trickery by media and Western governments.

Expressing this sentiment is tantamount to not taking Ukraine’s side in this war; the careful reader will note that Jamieson never did so. Ukraine is being victimized by an imperial force, but there are those who would rather take up arms over the molehill issues of supply lines dotting the mountains of displaced, killed, and injured. Why the author felt compelled to pre-emptively defend themselves in saying “I am ANTI-WAR and NOT a Putin sympathizer” assuredly has something to do with this misguided perspective.

The West is not a benevolent force. This conflict is an instance of it having done  something largely positive. Provision of Western equipment has helped Ukraine to repel invading forces and recapture land with a momentum not unlike that expected of Russia at the outset of the conflict. While the evils of Western powers are innumerable, it must be noted again that nuanced analysis is an imperative. “NATO bad” won’t cut it here.

Jamieson’s work begs readers to ask: “If the West involving itself with Ukraine is so bad, what’s the alternative?” The author offers no alternatives, though, preferring only to make Ukraine out to be an enemy of free speech and beneficiary to an immoral campaign of media approval.

Should we wish to put our disdain for war into practice, we must begin by refusing to raise our hands in surrender when an aggressor comes to bear and by refusing to respond “they’re no angel” when a cry for help is heard.

Be aware, wash with care