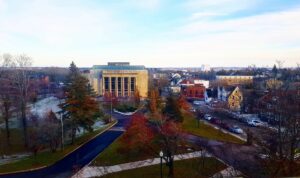 The Argosy has a long history to be proud of

Mount Allison clothing, scarves, mugs, pens, and the remaining plethora of branded merchandise used to be sold by The Flying A. It was an independently owned business in town that shared a wall with Joey’s restaurant. They’d had the contract to sell Mt. A branded gear as long as most could remember, and a web presence since 1998.

In 2006, Mount Allison told the Flying A that the university would not be renewing the contract. Instead, those sales were to be brought in-house and merged with the operations of the university bookstore.

The Argosy broke that news. Students were sad, they said goodbye to a local business that had become a fabric of their university experience. Townspeople were upset that a vibrant local business would close, through no fault of their own. The Argosy hosted discussions about the role of the university as a good neighbour in town, about respect for local businesses, and about the intersection of student life in the town. The Flying A closed its doors in January 2007.

The Argosy holds a rarefied role in the Canadian student press. As an independent student-run publication, it is among the smallest in the country. But it is also the alt-weekly for the town in which it publishes. That position has forced its staff to think beyond their own horizons for more than a century.

Argosy archives contain discussions from the lead up to the First World War about the threat of war and its impacts on student life. But not to limit their horizons, the staff of the day entered into a content sharing agreement with the McGill Fortnightly, today the McGill Daily. Together they published a broader student perspective about the rush to war.

That partnership grew, and in 1938 both newspapers were founding members of a national collective of student-run newspapers: Canadian University Press.

In the 80-some years that followed, Argosy staff changed generation by generation. At times, the paper found itself adrift, aimless, and its very existence threatened. At other times it has found itself emboldened and strong, in a position to challenge the structures around it. It has faced legal challenges for its mistakes and awards for its victories. Its alumni are now scattered throughout the world.

But I come back to that single series of stories about the Flying A in 2006 because it represents to me the best work that a local newspaper can do: break news that affects its audience and allow the ensuing conversation to flow through its pages. Through that work, it can foster community, cohesion, understanding, and even, sometimes, anger.

At its best, The Argosy has helped to bring that sense of solidarity to the campus and the town. At its worst, it has been easily ignored or even offensive. But throughout its now 150 years, it has been a bastion to Mount Allison’s ambitious and weird. Parapets of shape-shifting ideas over a moat of ink, bridged with paper and pixels, it’s where countless ambitious and weird people explored their limits, screwed up in horribly creative ways, learned their lessons and came back for more. It’s where hundreds of people have tinkered with and then decided to pursue or abandon literature, music, cartooning, journalism, photography, design, and countless other fields. And, in 2003, it was where I found my people. It warms my heart to find it alive and weird today.

The Argosy’s longtime responsibility to the local community