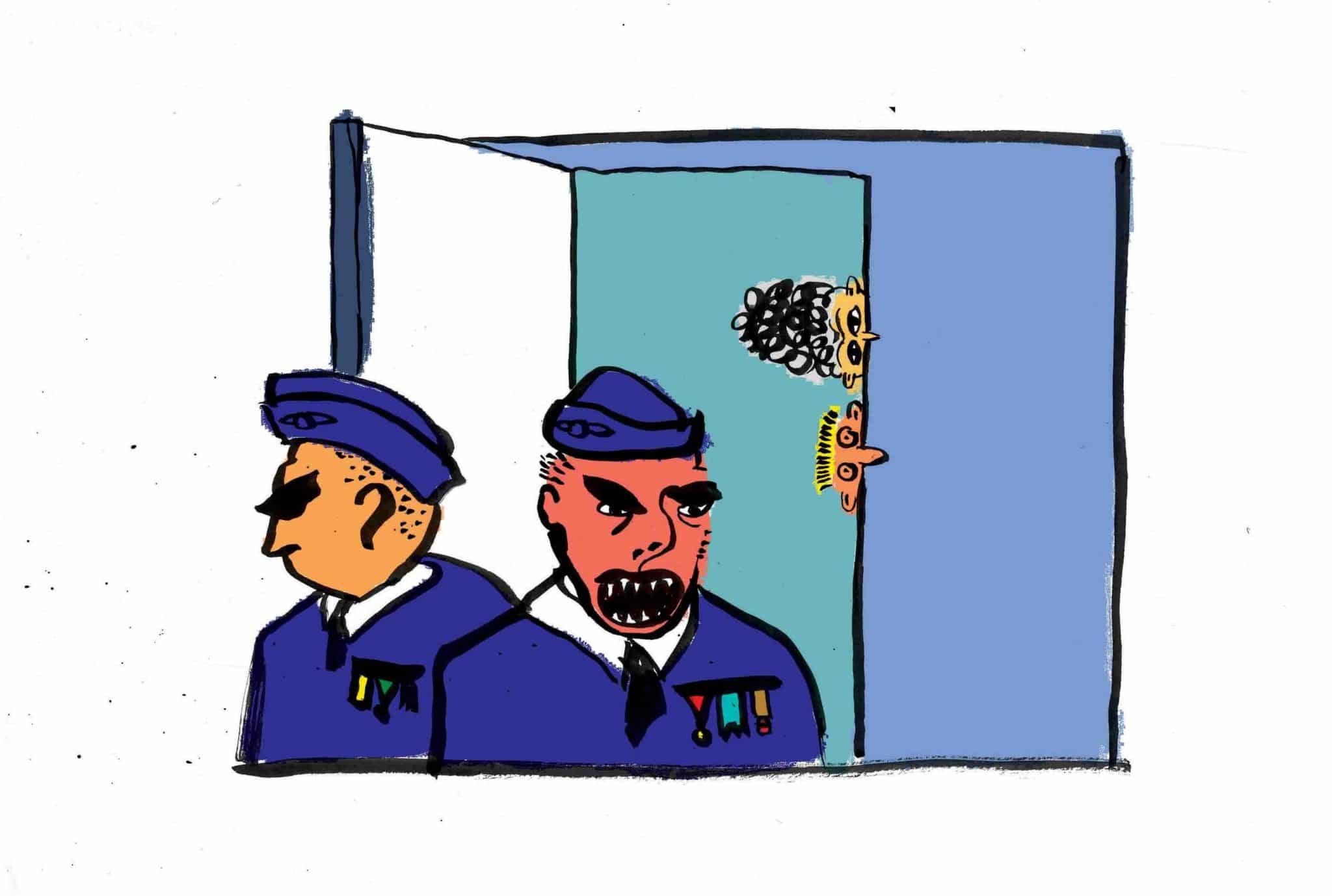 Ralph stood stock still, his body pressed against the grey concrete wall like he was made of paper. He could hear the cicadic buzz of the cylindrical LED lights on the ceiling, and the quiet hum of a vent farther down the hallway. He held his breath and counted to ten, then, sure there was no one nearby, continued to creep down the hall of the Lincolnshire Air Force Base.

He passed dozens of closed doors, all grey with black handles, and labeled with a letter and three digit code. One hallway led to another in the endless maze, and he found himself back at a door he knew he’d passed already. Blazing sassafras! Do they take me for some kind of Theseus? Exhausted and frustrated, he pulled a small flask of wine and a chocolate marshmallow granola bar from his back pocket, and squatted down against the wall. And Christ, why in hell is this place so deserted!?

But the second the thought crossed his mind he instantly regretted it, as the quiet clop of heeled shoes reached his ears, emanating from the vent above him. He sprung to his feet and, unsure in which direction to bolt, ran back towards the hall from which he’d come. He rounded the corner tightly and blundered into an elderly woman, knocking her right over and landing on top of her, his face crushing hers.

“Officer! Please help me,” Ms. Fannon pleaded as he rolled off of her. “I was on a tour, and have become terribly lost.”

Ralph was stunned to see his old neighbour Ms. Fannon lying beside him (he’d moved away from her street when his parents separated).

“Ms. Fannon! It’s me, Ralph,” he spat out in a whisper. “They don’t give tours. What in an olive tree are you doing here?”

“Ralph! My word, you’ve grown. Shouldn’t you be at school?”

“Shhh! They’ll hear us. Look, Ms. Fannon. I’m committed to the pursuit of justice, wherever it takes me. I’m here to dig up some dirt on the Herr Hansel murder.”

“Well, you know the teacher Ms. Tallrustle? She was dating Herr Hansel, but it’s led me nowhere. They’ve done a pretty good cover on this one. But everyone saw that military plane, and I’ve been communicating with Herr Hansel’s spirit and he’s urged me to come here. There’s got to be something here.”

“Well, let’s keep looking. If they catch us I’ll pretend I’m having a stroke.”

Our heroes slipped about the base for another thirty minutes, mystified by the emptiness of its inner layers. But as they reached the end of yet another hallway, they heard the distinct sound of angry men. Peering around the corner they saw nothing, but the sound clearly came from a room about 20 metres down the hall.

“Cover me,” Ms. Fannon said, and she set off down the hall without waiting for a response.

As she neared the door the muffled shouting became clear, and she bent over to place her ear on the doorknob.

“General Howe, this cannot go on.”

“Corporal, you may leave.”

“Sir,” the Corporal growled, “the findings of my investigation are clear. We know what happened.”

“Corporal, you will erase the results of the investigation! No one can know that Herr Hansel’s body was here. Is that clear?”