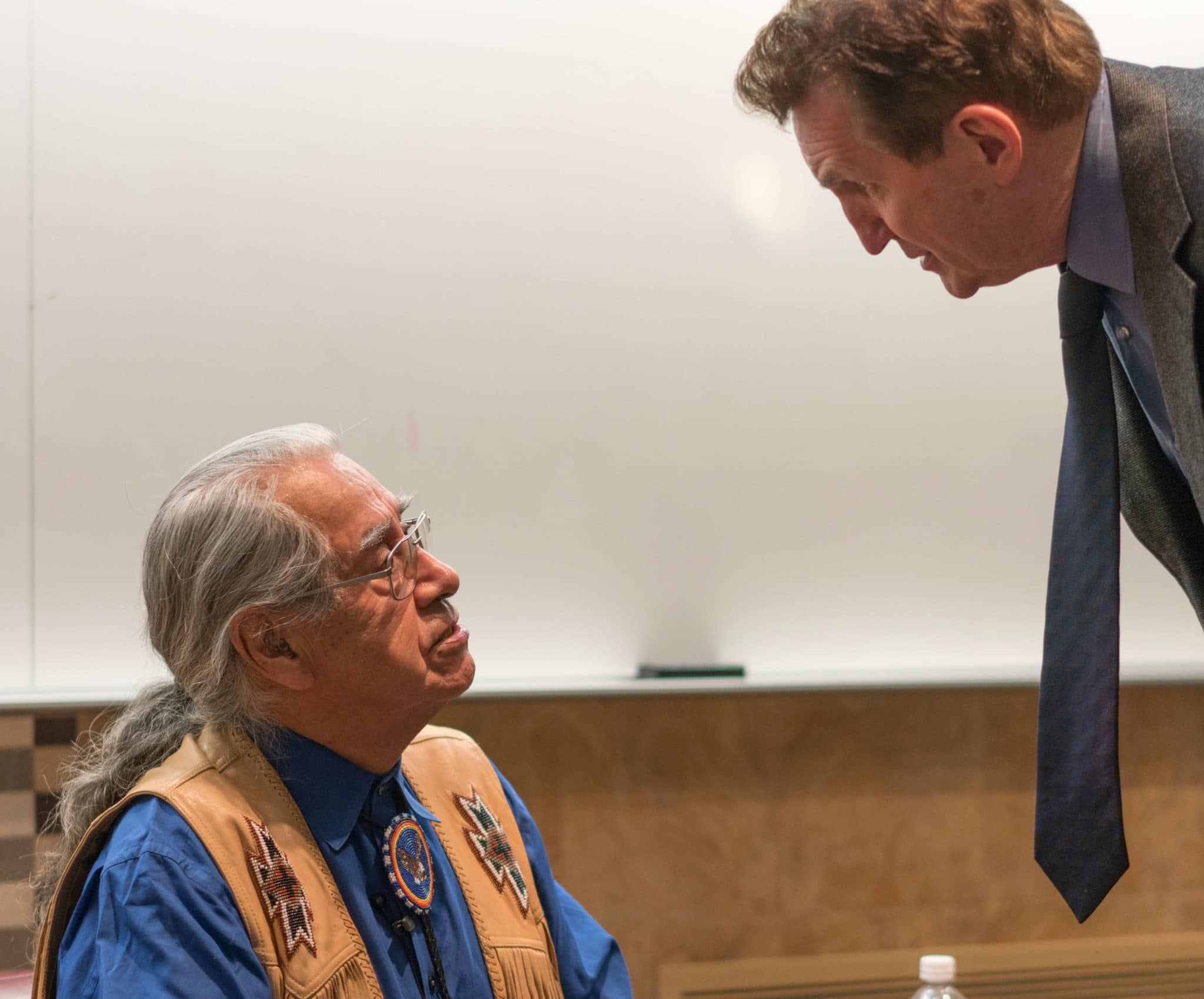 The President’s Speakers Series continued Jan. 16 evening in Crabtree auditorium. The speaker, Elder Albert Marshall, who comes from the Moose clan of the Mi’kmaw nation, spoke to a packed audience. Crabtree, Mount Allison’s second-largest lecture hall, was brimming with excitement at the opportunity to interact with one of the most influential advocates of the Mi’kmaw community. He often speaks of combining views to enrich our lives as members of this land and to commit to our environment as well.

Marshall began his talk by speaking for a minute or so in Míkmawísimk. The crowd, that had been chattering, quieted at the chance to listen to a language that is rare nowadays. Those in attendance were from a range of backgrounds, from university students, to children, to professors, to other residents of Sackville.

The focus of Marshall’s speech was a term that he himself coined: “Two-Eyed Seeing.” This is a way in which people interact with their environment and with themselves. “Two-Eyed Seeing helps me inwardly reflect,” said Marshall. “Who I am, where I’m going and why.” He spoke on how it is a way to look at ecological problems from multiple perspectives, both what he called a “Western” notion of science and the spiritual aspect that is so important in Mi’kmaq communities.

Marshall, who lives in Eskasoni, Unama’ki (Cape Breton), tours universities and halls around the Maritimes to work with Mi’kmaq people of diverse backgrounds. He teaches them about Two-Eyed Seeing and integrating it into their everyday life. It’s a lifestyle that can help people who struggle with a sense of being lost and introduce them to a way they can live in harmony with their environment.

Combining these two different focal points is central to Marshall’s goal. “We have to understand we need to be self-sustaining both spiritually and physically,” said Marshall. Looking ahead seven generations and asking if his actions are producing positive outcomes, and looking seven generations in the past and reflecting on whether or not his ancestors would be happy with what he is doing, he said that we should be able to enjoy the beauty of our shared land, and strive to maintain it for as many generations as possible.

Prior to the speech, Marshall showed a video of the situations that can arise when living in two worlds. Patricia Doyle-Bedwell, an associate professor at Dalhousie University, said, “All of us, as Mi’kmaq people, have felt that connection that sometimes we are living in two different worlds.… For me the idea of Two-Eyed Seeing came up in law school. I felt my Mi’kmaw culture coming up against the Western culture.” Marshall’s term seeks to open these two points of view, allowing them to live harmoniously. “Reciprocity is critical.… This is something we must work on. Differences are who we are,” said Marshall.

Marshall finished his talk to a room stunned to silence. His powerful words were felt and reciprocated by the crowd. “I loved it,” said Jessica Grant, a third-year English student. “It was extremely insightful.… It’s something that we can use in day-to-day life for situations that can be blurry.” Thunderous applause followed, and many members of the audience stayed behind to give thanks to the elder.