‘SHOAL’: A temporary reliquary in the grass 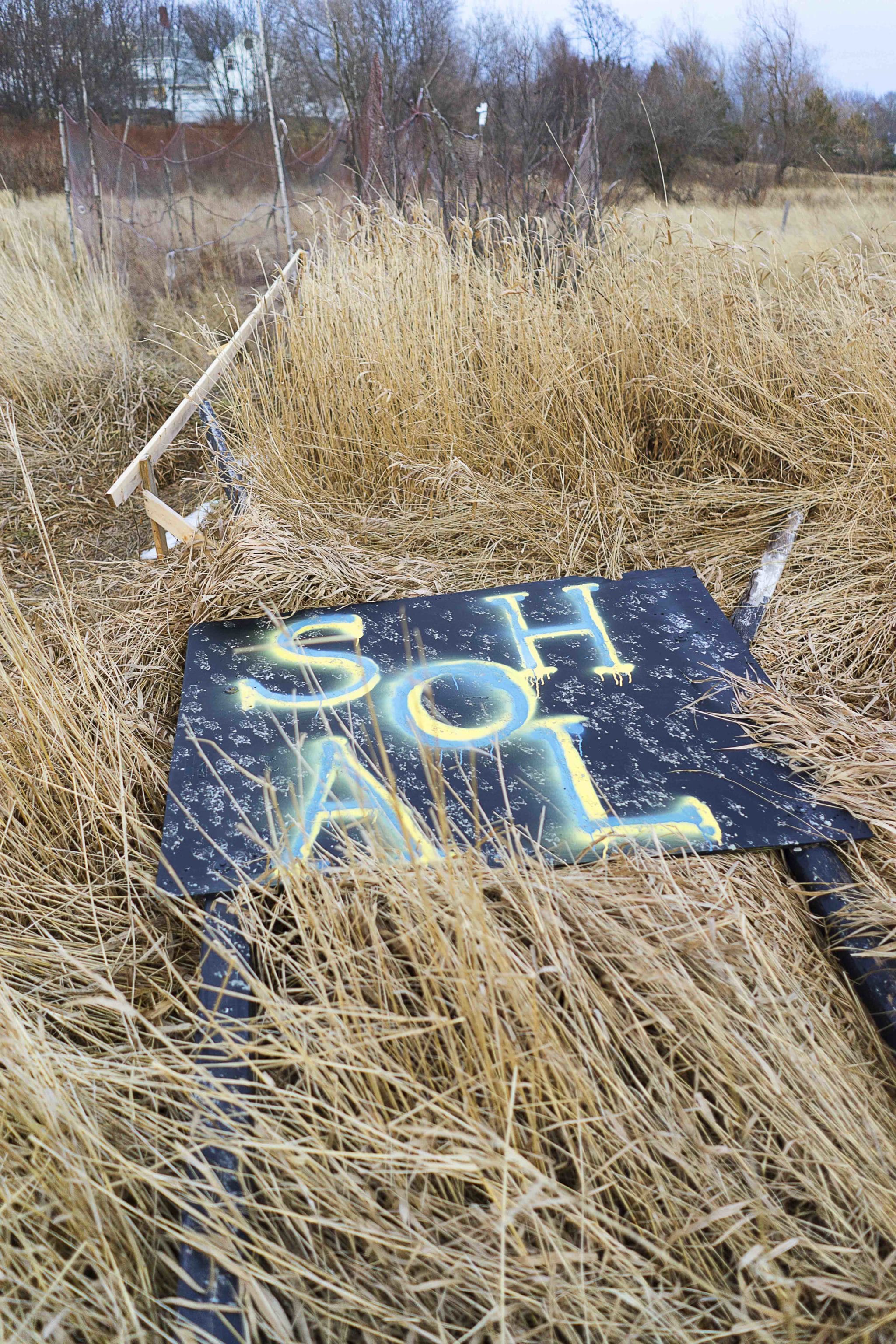 At the edge of what is arguably urban Sackville – just off of Lorne Street, across a small canal and nestled in the tall grass – stood a large sign reading “SHOAL,” its five letters arranged in a large X. Installed as early as Aug. 4 (Sappyfest weekend and the probable date SHOAL went up), SHOAL is an installation that seems to join the borders of civilization to those of nature. Its creator was unknown to me, likely the work of a local artist (I would later discover this to be Shamus Griffith). The only overt indication of its meaning and origin were small cards left in a box under the sign that each read a brief “SHOAL, A Reliquary” with a minimalist map marking its location.

SHOAL’s location seems to be as important as is its components: it can be found off Lorne Street, only indicated by its sign (now fallen) and tall, thin logs protruding from the tall grass. When I first visited SHOAL, Lorne was completely dug out for construction. I had to navigate the site carefully, climb into the newly dug canal, balance myself across a rickety plywood bridge (for all I knew this was wood stolen from the construction site), and then sidle along the opposing edge of the canal, brushing past tall grass. I could here see that below the large sign was a bench, presumably so I could catch my breath after the urban gauntlet I had just endured.

The installation itself was inside the tall grass, which had been packed down in a gourdish shape, its stem being the entrance next to the sign. A rail was installed behind the sign to help visitors into the heart of the installation. Once I got closer I could see what the thin logs were for: to border the enclosure I now found myself in. Set up in a semicircle around the stamped grass and lined with a net, this border was reminiscent of a cage. Poking through the net’s holes were sprigs of unstamped, tall grass.

Inside the enclosure were several hollowed-out logs mounted on thin poles, each approximately knee-high. These were scorched inside and very smooth – man-made creations altered beyond anything else found inside the installation. They were holy relics contained within the reliquary, I suppose. Also found inside was a dead bird, bound and suspended by rope, that acted as an archway into the enclosure. This was my first experience with SHOAL.

After the summer, I returned to SHOAL. The installation itself initially appeared untouched. The first difference I noticed was the state of Lorne Street. The construction had progressed, but not by much. The street was no longer a ravine; it was now an extended dust bowl. The second thing I noticed was that the bridge had mysteriously vanished. This meant I had to go around the now-filled canal and balance along the entire edge of the canal, while the tall grass pushed at me like hundreds of tiny arms, to get to the installation. By the time I was comfortably planted on my two feet and ready to revisit SHOAL, I was uncomfortably covered in burs. My entire left flank, including the exposed part of my left sock, resembled a spiky carapace. It took about an hour of dedicated picking to have these totally removed. I had to interact directly with nature to visit the installation, and it looked like the installation had had its own interactions with nature as well.

The thin logs that prevented visitors from stamping down any unpartitioned tall grass had begun to collapse; the wood must have been rotting. The fibres that suspended the bird corpse had begun to disintegrate and the bird now dangled from only one of its two supports. The trampled grass had begun to bounce back, unfurling after having been pressed so flat against the ground. The charred logs seemed to be the least altered by time and elements, although they were altered by humans prior to installation.

I returned to SHOAL again in the winter. The sign was now lying on the ground and covered with snow. I think the bench was gone. The charred logs had also disappeared, presumably to preserve the labour that went into making them. SHOAL’s degradation seemed to have halted for the season, but it would probably continue in the spring, perhaps disappearing into the tall grass with as little a trace as it appeared.