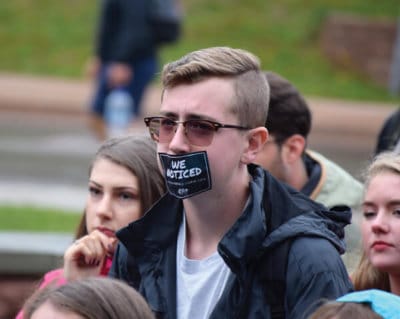 When one door closes, a laptop opens

In recent years, there has been much strife between the administration and students over changes to the University’s spending. The most recent incarnation of this tension is the conversation about cancelling correspondence courses. It goes without saying that this move royally screws over a loud minority of students who depend on these courses to complete their degrees within their preferred timeline.

However, these changes within the academic world are only molehills turned into mountains, exacerbated by the desire to complete our degrees. In many ways, the world of learning has expanded in a similar fashion to the moments after the Big Bang – the dark energy accelerating this increase being, of course, the Internet. This expansion has moved in many dimensions, from the number of sources available to the areas of expertise being explored.

We can see this transformation happening at Mount Allison. First, in the increased cross-pollination of courses between the Maple League universities. Granted, many perceive this union as a half-hearted mimicry of the prestigious Ivy League. This view overlooks the niche courses this union has opened up to students from all four of these institutions via teleconference, such as a course on genocide and justice last year, and an interdisciplinary course on time this year.

On a more domestic level, though it seems a different department is on the chopping block each year, there has been a increase of special courses within departments. You may know these little gems by their middle digits, 99 (for example, ECON 4991: Radical Ideas in Economics). These courses are sometimes pilot courses, sometimes a little radical, but offer more specific areas of focus compared to more established courses. These offerings include a course on graphic novels, another on global capitalism and yet another on Indigenous legal and political issues.

Yet outside this campus lies a even larger treasure trove of knowledge waiting to be uncovered. A number of useful websites have been created to provide those of us with access to a screen and a Wi-Fi connection access to an unknowable variety of knowledges. Similar to the salons of old, where one could learn at their own pace and engage with new ideas in conversation with others, virtually the whole world has the opportunity to explore what the Internet provides, though always with the risk of offering misinformation.

Academia, as well as pop culture, has taken advantage of this explosion. On sites like edX, you can take free online courses offered by institutions such as Harvard, MIT and UC Berkeley. Other websites focus on hobbies and skills, such as Craftsy, which offers (at a price) programs from pasta making to drawing. Sites such as these could allow all manner of people to learn valuable skills they would not have access to otherwise, whether for accessibility or monetary reasons.

Sometimes, in the rush to fill all the holes in our degree audit forms, we forget that we are not just here to get a thin piece of paper, but rather to pursue an education that will further our lives and understanding of those around us.