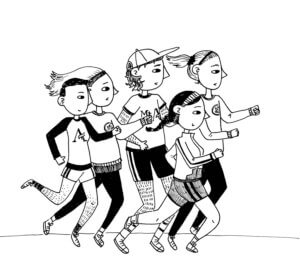 Classes are a great way to get in shape

Group fitness classes are included with Mount Allison tuition, as well as a regular membership to the Fitness Centre. Each weekday there are different group sessions offered at the Fitness Centre by certified instructors.

Many choose group fitness as opposed to individual workouts because the company of other people motivates them. By going to a class, you are held accountable and go more often, since it is something set in place for you.

Erin Melanson, a first-year English student, was unaware that Mt. A offered this opportunity to students. Melanson said her biggest struggle with staying active is motivation: “With classes you have a good support system laid out for you from the start, you feel more obligated to go.”

Karen Arsenault, the group fitness coordinator at the centre, was previously a student at Mt. A. Arsenault has held this position since 2009. Currently there are three instructors, though students have also led a variety of classes throughout the years.

“As a group we tend to push a little bit more or get through things because you have someone that you’re laughing with,” said Arsenault.

The schedule tends to remain the same each term in hopes of  encouraging more students to be able to fit the group fitness classes into their busy schedules. The Fitness Centre offers four classes: strength training, yoga, athletic cardio and total muscle conditioning (TMC).

There is also a specialized training program offered at a cost of $10 per class called Fitcamp/SHRED. Arsenault said it is developed to make personal training more affordable. It is four weeks of a bi-weekly class as well as an emailed program sent out to assure you are on track with workouts for home and nutrition.

According to Arsenault, instruction is one of the major benefits of taking a group fitness classes, particularly if someone doesn’t know where to begin. “It comes with a lot of good guided instruction, too, to give you a really good base to hopefully complement overall the wellness we are hoping people will start to adopt,” she said.

Graeme Stevens, a second-year political science student, is a linebacker on the Mounties football team. He went to yoga classes last year, but this season the class time conflicts with football. Stevens chose yoga because it is “a good combination. I like how it’s athletic, it gets your body going. But also is stimulant to your mind and is good for dealing with stress.”

Stevens appreciates being led in his yoga, especially when it comes to meditation. “I tried a couple times to do it by myself but I find I’m not as on-task as if someone was leading it.” He also said that having an instructor teaching proper techniques helps. “I tried to do a few moves, but I don’t feel like I’m experienced enough as a yoga person to do the whole process [on my own].”

The schedule for group fitness classes can be found on the Mountie Pride website or on the Mount Allison Group Fitness Facebook page.