Women’s field hockey continues to grow in membership and funds 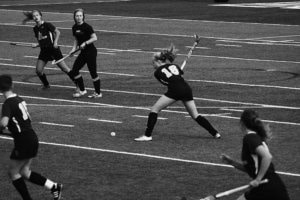 Though only five years old, the club team boasts many dedicated players

The lights over Alumni Field turn on before sunrise three days a week. While most students on campus sleep, dreading waking up for an 8:30 a.m. lecture, over a dozen field hockey players’ alarms go off at 5:30 a.m. Waking up this early is crucial, to ensure that they are at the field for 6:15 a.m. practice. Being a club team, it is hard to book time on the turf because the varsity sports teams have priority. Therefore, the field hockey team bites the bullet and practices before dawn.

Field hockey has only been on campus for five years, but progress has been made every year. Since it is a club, they don’t get funding like the varsity sports teams. The team gets money from fundraisers, grants and donations. This year, they finally got enough money to purchase real field hockey nets.

“We’re super grateful. We’ve had a lot of support recently. The athletics department and Pierre Arsenault have been great to us,” said Ava Berry, who has been playing for the past three years. “Every year we’ve gotten more serious. Even though it’s a club, it’s still an actual sport. Commitment has gone way up, even just since last year.”

Julia Bland, a third-year student and the current head coach, also commented on how committed the team is. “We practice at 6:15 a.m. three days a week and we still have high attendance, which is great,” said Bland in an interview. “The girls work so hard in practice; we have a lot of first-year players. It’s really exciting to see them improve.”

Like many players on the team, Berry had never played field hockey before coming to Mt. A. Growing up playing soccer and hockey, she decided to go out and try the new sport. She has played for the past three years since originally trying it in her first year. She encourages others to do the same, and try out the sport even if they don’t have any experience.

Bland and Berry commented on how a goal for the team next year is to host a real game with referees now that they have nets. The next step would be getting proper lines on the field.

The season ends with their last tournament next weekend. However, they have an indoor tournament in March in Fredericton that is co-ed. With the club continuing to grow on campus, the exec is hoping to have more players join in the near future.

If you are interested in trying field hockey, you can contact the club at [email protected] No experience necessary!