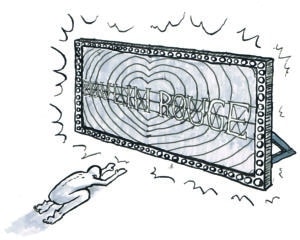 The 2021 Tony Awards quickly went from a celebration of Broadway returning, to a confusing mess of mixed messaging. Things were bound to be at least a little confusing this year, given that the “2021” Tony Awards ceremony would really be honouring productions from the 2019/2020 Broadway season. Instead of having the awards presentation and live performances as a part of the same ceremony on prime time TV, the actual presentation of the awards happened during a two hour ceremony on Paramount+, and then immediately afterwards, CBS broadcasted a performances only “Broadway is Back” special.
The awards portion was hosted by Audra McDonald, legend of stage and screen, but even she could not make up for the blandness of the award winners. Moulin Rouge! The Musical—which premiered off Broadway in 2018 and on Broadway in 2019, swept the ceremony with ten award wins. The silliest of these wins being Aaron Tveit who won Best Actor in a Leading Role in a Musical; he was the only nominee. Clearly this year’s awards had a very small pool of musicals to choose from when it came to nominations, which makes it all the more bizarre that The Lightning Thief: The Percy Jackson Musical did not receive a single nomination, despite also opening on Broadway in 2019!
However, the biggest issue with the Tony awards this year was their blatant lack of diversity and active discrimination. A Vulture article wrote, “in the actual handing out [of awards], the voters went for some very white, very stodgy work,” which sums things up pretty well. Slave Play, a “provocative look at racism, gender, and sexuality” (Variety) had a lot of positive buzz around it, and a whopping twelve award nominations, so the fact that this play did not win a single award was not only devastating, but also incredibly tone deaf. In an awards ceremony that mentioned the murders of George Floyd and Breonna Taylor, in an act to talk about the importance of diversity and inclusion, the five award wins for another Christmas Carol stage play made those words feel more than a little hollow.
You can acknowledge an issue as much as you want, but if you are not willing to actually do anything to remedy the issue, or to do better moving forward, then your acknowledgment means absolutely nothing. Nowhere was this more blatantly on display than with the musical Jagged Little Pill’s two Tony Award wins. Now, two awards may not seem like a lot, but even that was far more than the musical deserved. To sum up a very complicated situation, when Jagged Little Pill first opened off Broadway in 2018, cisgender woman Lauren Patten played non binary character Jo. This was already a bit of a yikes move. It is certainly not as bad as the musical rewriting the character of Jo to be a cisgender woman when Jagged Little Pill opened on Broadway in 2019 and pretending like Jo was never anything but a cisgender female character to begin with.
Along with numerous accusations of traumatizing mistreatment towards transgender cast members, resulting in two of the leading performers (Cecilia R Gooding and Antonio Cipriano) actually leaving the show, Jagged Little Pill’s two wins were deeply disappointing.

The aforementioned Lauren Patten even WON for her portrayal of Jo and gave some vague, empty speech about how Jagged Little Pill has started many “difficult conversations.” I guess that is better than Diablo Cody saying nothing about the controversy surrounding Jagged Little Pill while accepting the award for Best Book of a Musical.
The performances were fun as usual, but having Leslie Odom Jr. host this portion of the ceremony after he starred in Sia’s extremely controversial movie Music less than a year ago, was yet another tone deaf choice to add to the list. The idea of the whole “Broadway is Back” section of the night was nice enough and featured some amazing, nostalgia-inducing performances from shows like Wicked and Dreamgirls. But it also drove home the theme of the night that ended up being Broadway’s reluctance to move on from its past.
As a nonbinary person myself, I have always wondered why we have two categories, one for best actor, and one for best actress, when we could just have one gender neutral best actor category that gives out two awards. In the year where there was only one best actor in a musical nominee, it would have been the perfect time to test out having one gender neutral awards category. This year’s Tony’s wanted to preach progressive ideals of diversity, inclusion, and looking towards a brighter future. Yet, they filled their ceremony with white award winner after white award winner and topped it off with performances honouring Broadway shows and stars of the past, instead of the shows and stars of today!
When accepting his award for Best Revival of a Play, A Soldier’s Play director Kenny Leon said, “The table needs to be bigger. When we hear all of the stories, we are better. Let’s do better.” I think that we have spent enough time talking about wanting to do better. Maybe next year, the Tony Awards will actually do better.